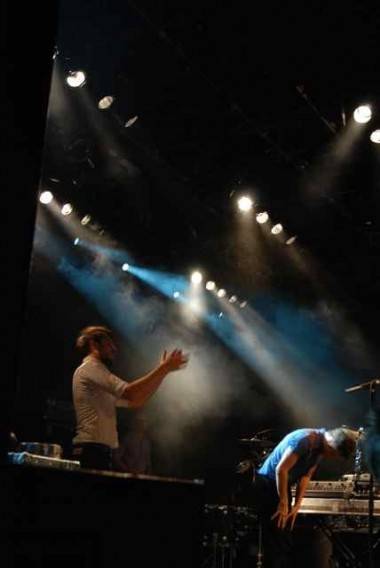 While some might describe what took place at the packed Commodore Ballroom Thursday night an eclectic evening of music, it would be safe to say that the more typical response from concertgoers would be something long the lines of “This show was frickin’ crazy! Woooo!” or “Best. Indie. Night. Ever.”

Actually, real people said those exact things. Three acts played to this upbeat and appreciative crowd, though regretfully most people seemed unaware that Holly Miranda, a Brooklyn-based singer/songwriter, was scheduled to play, and her understated, melodic set was unjustly ignored (at least the last two songs were, which is unfortunately when we waltzed in). “Um, it was good background music…” was the general opinion of the weirdly preppy, undeniably peppy fans who were there primarily to cut a rug to Friendly Fires’ poppy dance punk, or whatever you call it [Wikipedia refers to the band as “alternative dance”. But what does Wiki know?-Ed.].

Things picked up considerably when trio The xx took the stage. Though the London youngsters (average age: 20) recently dropped from four to three members, there was nothing lacking from their set, and the trio played everything from xx, its summer debut. Live, they sound a little like Massive Attack meets the Velvet Underground, and Romy Madley Croft has a really strong, pretty voice in person, though a lot of the time Oliver Sim sounds oddly like Chris Isaac.

Most interviews with the band mention the members’ laid-back attitude and average-Joe appearance, but onstage they were remarkably poised, and seemed relaxed and confident, as though they’ve started to project a more rock star vibe. And it works.

“Crystalised” was a highlight of the set; beginning in a mellow vein , the song gave way to a dynamic, pretty heavy (for them) rendition of another xx track, “Infinity” that made this writer wish they had some more intense material. Still, it’s pretty clear they have only begun to show their prodigious potential and, by the end, had prepared the crowd for the main event…

Friendly Fires‘ sound is pretty hard to classify, since many of the UK act’s songs sound like they could be by different bands entirely. But the Hertfordshire group (augmented by a fourth member live) really brought it in full force for this show.

The evidence was all over the dancefloor, which became a seething mass of mosh-y writhing. Our photographer was initially unimpressed with the first couple of songs and remarked, “This isn’t really my thing at all,” until the third song when she exclaimed, “Omigod, this is actually my favorite song! Didn’t know it was by them!”

The overall feeling of the show was a bit like an extended mash-up of Chumbawumba’s “Tubthumping” but a bit less rugby-rock, and more gay. Singer Ed Macfarlane was sweating right through his polo shirt by the second song, “Jump in the Pool”, and kept up this enviable level of electricity throughout the entire set. By the end, the whole dancefloor was steamy as well.

People really love these guys, and it was refreshing to see the whole club truly enveloped in the rush of a powerful performance – in particular, “Skeleton Boy” and the finale, “Paris” had even the most rhythmically challenged folks grooving and moving.

In my notebook, one helpful fan had written the following to describe Friendly Fires: “Funky Groovy Awesome packaged in a big bundle of love.” I’ll accept that slightly fromage account. Friendly Fires delivered exactly what the crowd wanted and I don’t think anyone left disappointed, except maybe Holly Miranda fans. Hopefully next time she comes to the city she can show her considerable talents in a more intimate venue.

One response to “Friendly Fires at the Commodore Ballroom”