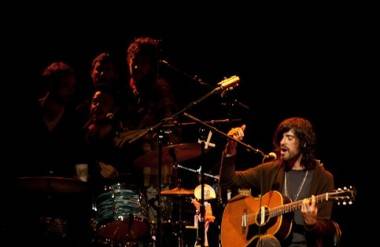 Coining them “the Grogs”, Devendra Banhart has put together an intensely talented five-piece consisting of guitarists Greg Rogove of Priest Bird and Rodrigo Amarante of Little Joy, to name a few.

With their help, Banhart took took fans through a myriad of emotions and tempos the other night during a two-and-half-hour live performance at Toronto’s Queen Elizabeth Theatre. Starting the set with tracks from the newly released album What Will We Be, which marks the musician’s transition from indie folkie to major label artist, the feeling was that of an upbeat summer day in the park.

As the set progressed, the rest of the Grogs left their leader to serenade the audience with a string of solo acoustic songs starting with “Little Yellow Spider”, a favourite of this reviewer. As fans continually shouted words of praise and song requests, Devendra Banhart – sipping on red wine that he joked was just some “dirty toilet water” – responded with loving humor and a genuine sense of interest in the audience, bringing an intimacy to the full 1,000-plus seat theatre.

Quirky lyrics about animals and love, accompanied by his flirty yet sloppy hand gestures, made him that much more endearing. He even wrapped up the acoustic set with a rough cover of an obscure Simon and Garfunkel song, “Punky’s Dilemma”.

Rejoining Banhart onstage, the Grogs began showcasing each of their individual songwriting capabilities. Bassist Luckey Remington took the mic and performed one of his own songs, as did drummer Noah Georgeson and guitarist Rodrigo Amarante.

Each demonstrated his own style as the songs ranged from Britpop to heavy psychedelic stoner rock to catchy avante folk, all topped with a bit of friendly Spanish stage banter. At one point, someone in the audience handed a pirate hat with a huge red feather up to the band. Amarante, who seemed ecstatic as he noted their name, the Grogs, means “pirate rum”, graciously accepted.

At set’s end the band exited the stage, but the guitar tech ran around frantically tuning guitars while the audience screamed for an encore. This writer had been waiting all night for Banhart to bust out his exhibitionist side and of course, with the encore, out came a shirtless and shoeless Devendra.

With an excellent medley of “Chinese Children” and “I Feel Just Like a Child”, he pranced around the stage, and reached out to touch the hands of fans. The sense of satisfaction was very apparent in the room – everyone had heard their favorite songs and experienced some new ones. Banhart’s first tour as a major label artist is proving to be a great success.

One response to “Devendra Banhart at the Queen Elizabeth Theatre, Toronto”