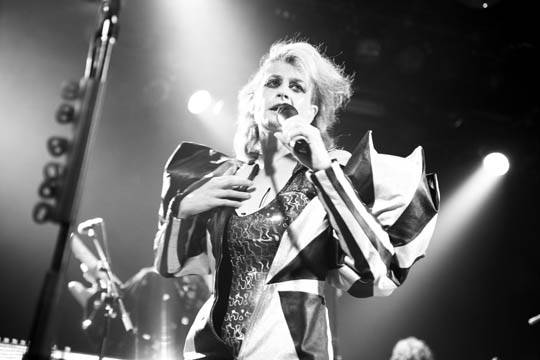 Peaches at the Commodore Ballroom, Vancouver May 31 2009. Melissa Skoda photo.

Review and photos – Peaches at the Commodore Ballroom, Vancouver May 31 2009

To say Peaches‘ sexual bluster and bravado strikes a chord that goes deeper with her fans than the music isn’t just academic hoo-ha. At the same time, the Montrealer just puts on a helluva show.

At the Commodore last night, she gave fans 90 minutes of blink-and-you-missed-it entertainment. Costume changes, crowd-surfing, dancers with heads shrouded in big furry masks – the bigger show is a definite step up from the former Merrill Nisker‘s club performances, when she would dance with a projection of Iggy Pop. You get the feeling she doesn’t need Iggy these days.

Never mind that I Feel Cream, the new Peaches album, doesn’t exactly warrant this kind of presentation (when a friend last night asked the title of one particular track, I half-jokingly replied that it was called “I Wish I’d Finished Songwriting School”). But as everyone who was there last night knows, it’s not about the records. It’s about the live show.

The set was a mix of what I like to call, mostly because the distinctions are totally bogus, “Early, Mid and Late Period Peaches”. What album is she on now, her third? Does it matter? She had three backing musicians, one female two male, playing guitar, keys and drums. There were those dancers, who came out towards the end. There was a moment, early into the set, when she went crowd-surfing, then into the bar itself to stand on a banister and sing. The music was raucous electro-clash and raw synthpop.

Stinkmitt, the two-piece of Jenni Craig and Betti Forde, got up for a guitar-heavy track called, I believe, “Roadkill”, offering up Vancouver’s own answer to Peaches’ raunch. There were outfits which couldn’t be called flattering, and hence made me feel like I could wear a full-body leotard, too.

She did all this while sporting what must be the unsexiest hairdo in the Western world, a mullethawk.