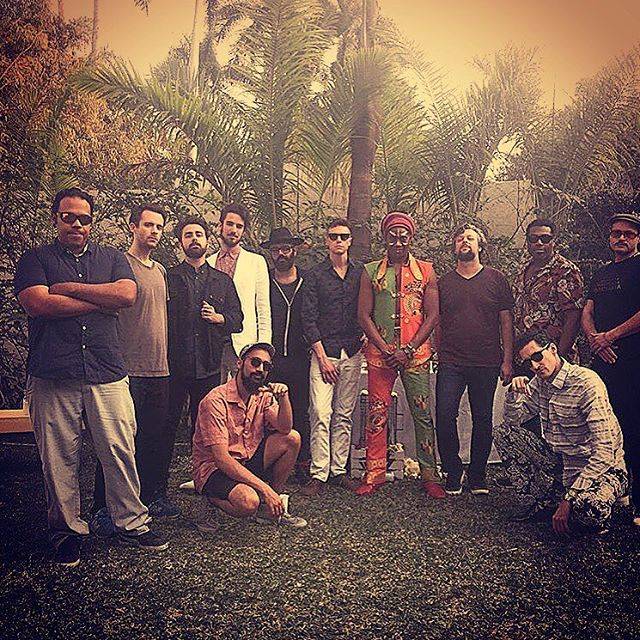 Antibalas were unstoppable Friday night at the Vogue, which the group played as part of the Vancouver International Jazz Festival. Their name means “bulletproof” in Spanish, and the reigning kings of Afrobeat definitely lived up to it.

Opening with “Dirty Money”, the Brooklynites ignited the venue with a heavy groove that set the tone for the rest of the evening. Seats had been laid out in the pit, but emptied quickly as everyone sought open spaces to get down. Antibalas is not a group you watch with your ass parked in a seat. The 12 members proceeded to shimmy and writhe on stage for the next an hour-and-a-half, which sped by in the blink of an eye.

Channeling the spirit animal of legendary Fela Kuti, frontman Duke Amayo continues to weave strong political commentary into the music – sometimes angry, sometimes funny, always funky. At one point, after Amayo made a reference to Trump, someone in the crowd responded with a loud “Fuck Trump!” Amayo’s answer was: “Actually, we should turn that into love. Love Trump. We’re gonna love him so hard he’s not going to know what hit him.” As cliché as that may look in print, I think we can all agree being less angry is a good thing. The magic is that when you hear Amayo say it, backed by the rest of his tribe, you know that he really means it. The cult of Antibalas beckons.

Their set included a cover of Rockwell‘s 1984 smash “Somebody’s Watching Me”, and the irony of the dude in front of us whipping out his phone to record them was not lost on anyone. No matter. Marcus Farrar killed it on vocals and the horn arrangements were sublime, so who cares? The four guys in the horn section were a treat to watch, especially when they all started doing the same dance moves. Trumpeter Jordan McLean in particular was awesome. He roamed the stage every now and then, sharing the mic with conga player Rey de Jesus, paying visits to the rhythm section and interacting with the crowd.

Another highlight was the slow burner “Him Belly No Go Sweet”, which almost put this reviewer in a trance. The hypnotic polyrhythms of Afrobeat take on a whole new dimension in a live setting – a reminder that dance and community a a huge part of the genre’s origins. It was great to hear the band playing a ton of new material as well. A new album is apparently on the horizon, their first since 2012’s self-titled Antibalas.

Also on the bill were The Mattson 2 from California. These identical twins take their musical DNA from so many places that their reputation as a “jazz” band seems quaint. There’s a punk aesthetic to their razor sharp playing which was electrifying live. I’m definitely keeping an eye out for them in the future. Their latest album is called Star Stuff and its a collaboration with Chaz Bundick of Toro y Moi.