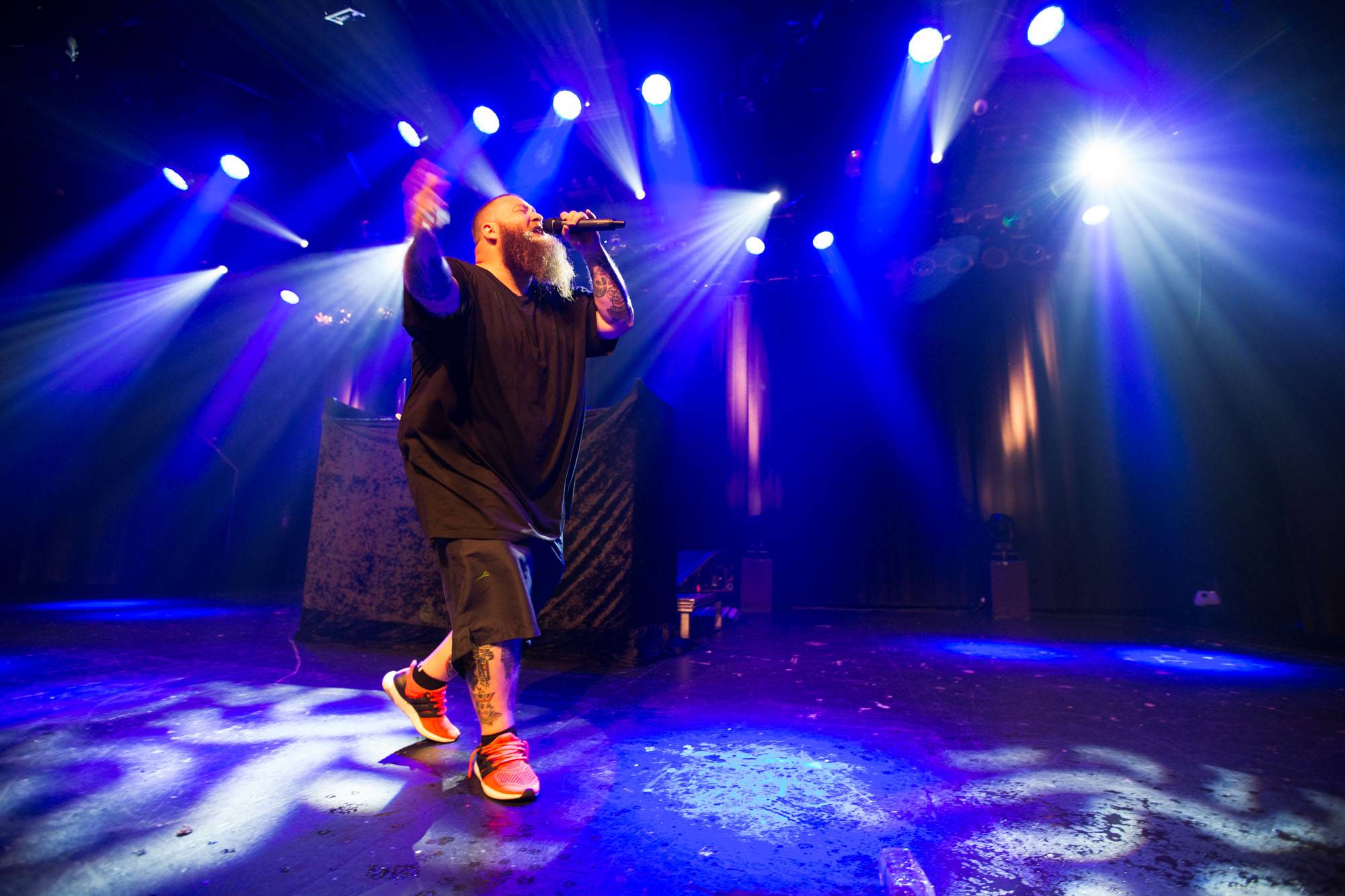 “I’m gonna be late for the Grizzlies game!” yelled Action Bronson, knowing just what to say to hype up the crowd. A raucous Vancouver crowd screamed back, pining for a long lost basketball team.

Bronson returned to the Commodore Ballroom stage after a year with frequent collaborator DJ/producer The Alchemist in support his new album Blue Chips 7000. The show opened with “La Luna”, Bronson screamed for a cab to take him to the aforementioned basketball game. Followed by “The Chairman’s Intent”, both singles off the new album.

First thing to notice is the unusual amount of time between songs as the show opened. It’s soon realized that Bronson was using these moments to sign anything and everything passed to him including copies of his new book, hats, even dash parts from a BMW. Hip hop shows are known for their slightly stripped down performances. There’s no set dressing, or over the top light shows. Just a DJ and a MC. These opportunities for Bronson to connect with his audience are what makes these shows unique. Getting an autograph is part of tonight’s ticket price.

Currently on his Blue Chips 7000 tour, getting a chance to rap might have been a welcome change of pace for the New York native. Hard work has catapulted Bronson from a gourmet chef to one of the biggest hip hop acts today. His current string of projects include a his new album, publishing a cookbook, and hosting two television shows on Viceland. With breakout hit “Actin Crazy” finishing off the first part of the set, the crowd is reminded that turning his part time hobby of rapping into a full time career was the right move.

As the night goes on, the crowd’s energy feels a little low. Maybe it’s the distraction of Halloween in the air. Bronson seems to pick up on this and accommodates with “My Right Lung”. A more relaxed track, he’s got the crowd is swaying and moving in a manner rarely seen at a hip hop show. The mood changes with Bronson jumping into “TANK”. As the set progressed, he upped the intensity in a way fans couldn’t help but notice. Jumping into “9.24.13” from Blue Chips 2 and “9-24-7000” from Blue Chips 7000, Bronson offered a different style from his typical tracks, mixing hard rhythms and old record samples.

Fan favorite “Baby Blue” closed the main portion of the show. While the audience sang the chorus, Bronson left the stage. Along with The Alchemist, he returned a few minutes later, to a chant of “Action! Action!” Bronson and The Alchemist end the night with “Amadu Diablo” with its Macy Gray sample “give me one reason to say here” closing out the encore. Another clever choice from a sharp lyricist to end the night.

Bronson has given every ounce of energy possible this night. His ability to judge the crowd’s mood and adapt has made for an outstanding performance. By the end, Bronson has turned the crowd from simply being at the show, to being part of the show. With his catalog of slick beats and fresh lyrics, tonight’s show was one to remember.