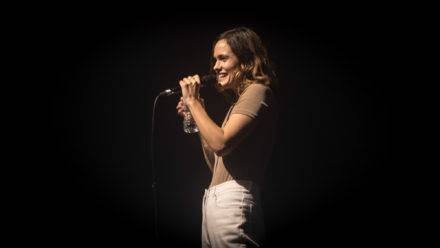 Throughout the set, which included songs from Don’t You as well as two new tracks, fans shouted out their encouragement (“Kelly!” and “We love you, Kelly!” were heard throughout) to lead singerÂ Kelly Zutrau. Bandmates Joe Valle and Marty Sulkow, along with a third touring musician, backed up Zutrau with percussion, guitar and bass that complemented her vocals. These were much huskier than her smooth-as-silk vocals on the group’s recordings.

Along with Don’t You songs like “Weak” and “These Days”, the band played newÂ songs “The Middle” and “Turn Away”.

“These songs are about being stuck in in-between places on a few levels,” the band told the FaderÂ recently about the two songs.