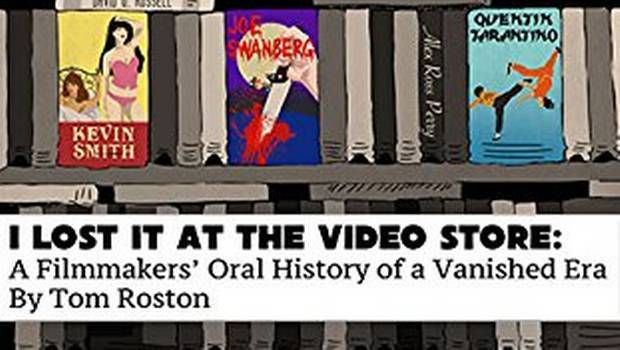 Nostalgia lies at the heart of Tom Roston’s new bookÂ I Lost It at the Video Store. And that nostalgiaÂ hasÂ resounded with enough peopleÂ to make it one of the best indie books of 2015, according to Kirkus Reviews.

It isn’t just nostalgic value that Roston brings back to us. As his interviewees relate, the video store phenomenon played a great role both in viewers’ lives and the filmmaking industry itself. The story of the direct-to-video boom times, the insurgent rush of independent films, the emergence of low-budget directors who would eventually become known as makers of cult classics – are facets that Roston exploresÂ in loving detail.

TR: Nostalgia’s a big part of it, definitely. About 2013, Blockbuster closed its last store – they’d filed for bankruptcy a few years before that. There were a lot of journalists talking about their old memories, and like you said, nostalgia. They were talking about “Oh, it’s the end of an era,” about their favourite video stores, and I thought, “Well, what about the filmmakers? I’d love to hear from the filmmakers, what they have to say.” And, as you know, Quentin Tarantino, Kevin Smith –Â there’s a whole generation of filmmakers who were raised in the video store. I thought I and a lot of other people would be interested to hear about it, that they’d be interested in sharing their opinions. I think it’s because they have a lot of affection, they identify with the video store era, and that’s why they took time from their own projects.

JP:Â Do you think that services like Netflix incentivize playing it safe, and reduce the opportunity of new filmmakers to court controversy?

JP: As streaming services gain their own studios, how do you think theyÂ that willÂ affect the film industry?