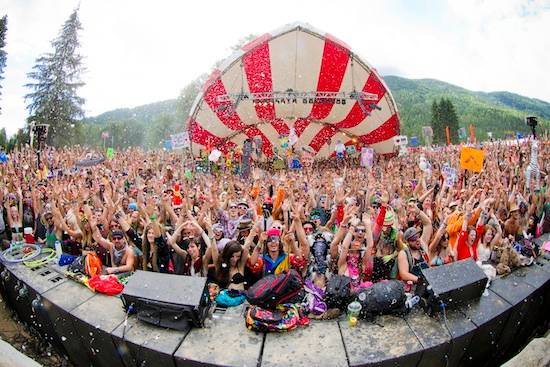 Upon arrival, attendees find fenced-off areas full of cows, pigs, and other various farm animals. Festival-goersÂ and artists alike refer to returning to the Farm as “coming home,” and this year’s reunion was one not to be missed.

During the afternoons, the Livingroom Stage sheltered party-goers as they took a break from the sweltering summer sun. Set along the outskirts of the party on the shore of the Salmo River, the stage offered a place where people could perchÂ along the river’s edge, share laughs and make new friends while cleaning and cooling their dusty bodies in the crystal water.Â Highlights included Saskatoon-based DJÂ The Gaff,Â who showed off his turntablist skills on Friday, and Nelson-basedÂ Emma Star, who spun deep house on Sunday. 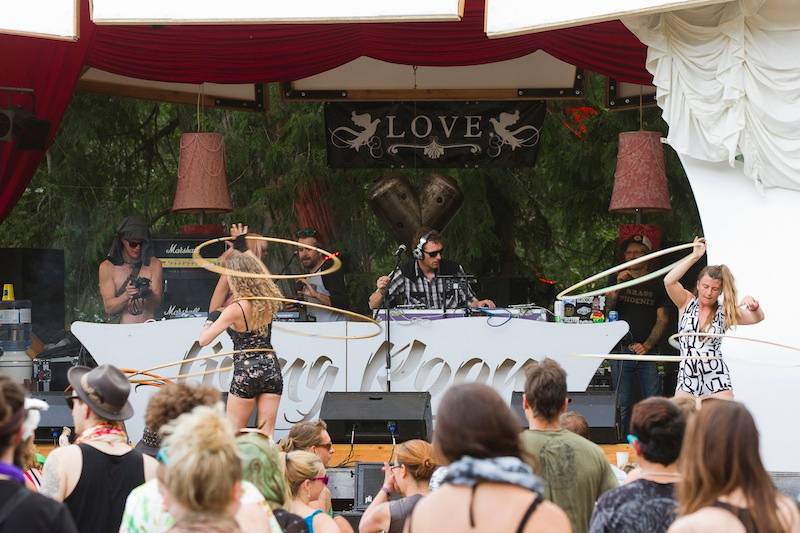 The Fractal Forest is covered by a canopy of trees while the stage itself is a treehouse built into old-growth trunks. Recently, the dancefloor was expanded withÂ the removal of a platform. The expansion proved imperative at night so that the sweaty bodies had more space to get funky.

The Forest’s SaturdayÂ Funk Jam began at 2 p.m.Â Led by Calgary’s Smalltown DJs, the jam featured international and local artists such as A. Skillz, The Funk Hunters, Skiitour, Slynk and Wood ’n’ Soo. Both the DJ booth and dancefloor were scattered with afros, sequins and tunics in bright ’70s patterns. In fact, afros and pigtails were worn by friends and fans in honour of Jon Horvarth of Fort Knox Five, who was unable to make it back to the Farm due to his recent hospitalization and deteriorating health. 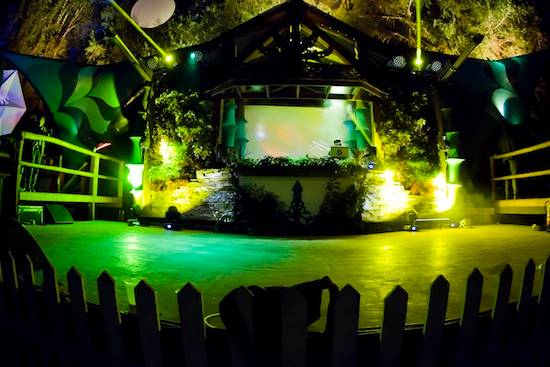 The Village was another daytime favourite for many and was located deeper into the forest by Fractal. Friday was filled with jungle and drum and bass by artists like Marcus VisionaryÂ and Victoria’s Generic and Dua. A Saturday afternoon Hip Hop Showcase featured Grouch and Eligh who welcomed talented rappers and scratch artists to flaunt their dexterity. The stage is surrounded by multi-leveled platforms where people can dance and enjoy the view of performers and artists alike. This year the stage was graced with not only DJs but beautiful dancers, acrobats, and live music shows featuring sexy saxophones and drum kits. 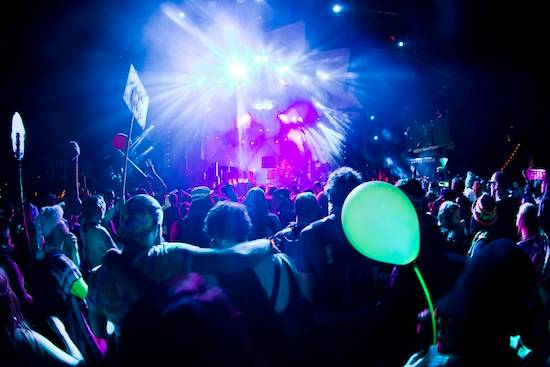 When the sun went down the lights and bass turned up and the treeline danced with colour. People floodedÂ the gates of the downtown area after changing clothes, and the party filled up quickly. Some munched on an evening snack from the eclectic selection of food vendors, while others embarked on their journeys to find the perfect tune. Some would head straight to Pagoda, which sat on the edge of downtown and was often referred to as “the main stage,” while others wentÂ straight to the forest to find Fractal, the Village or the Grove.

Formerly known as the Labyrinth, the Grove was the newest addition to the festival and a crowd favourite. A dance platform in the shape of a bird’s nest floated at the back of the dancefloor and in the corner a birdhouse, which looked big enough to camp out in, was perched atop another dancing podium. On Saturday night, dancers and acrobats from VancouverÂ performing arts groupÂ OmnikaÂ dominated the stage before J-Pod the Beat Chef‘s set.Â J-Pod is a BC favourite, not only for his producing and DJ skills but for his authentic and genuine nature and enthusiasm for making sure his audience is having the best time of their lives. He played a seductively funky set while his crew of dancing gnomes and anÂ eerie yet elegant dancing eyeball frolicked across the stage.

Another Saturday night favourite was The Pagoda stage, especially when the mystery headliner was revealed to be Zeds Dead (and not, as theÂ rumour had been,Â Justin Bieber). Dancers poured out of the stage and into the downtown area just to have enough space to bounce to his dub-infused beats. On stage you could see shadows of provocative dancers grooving on the many levels of the white pagoda shaped structure. 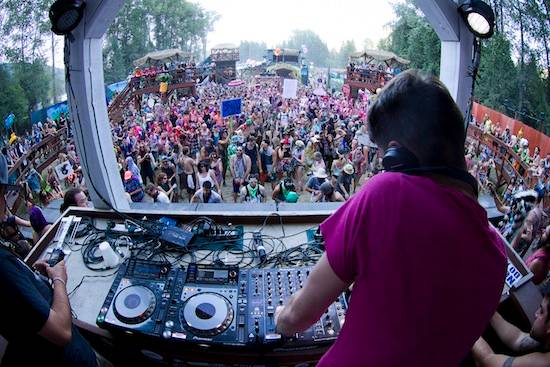 The soul-filling music and mind-blowing performers are not the only things that bring people back year after year. The community of acceptance and love that pulsates throughoutÂ -Â from the constant high fives to the sporadic hoots and hollers that start at one end of the party and flow all the way through like a tidal waveÂ – is part ofÂ what make Shambhala Music Festival an unforgettableÂ experience.

Even the volunteers, after hours without a break, wereÂ happy to offer a helping hand and a smile no matter theÂ time of day or night. Not only are the volunteers and staff stoked, but it is obvious that the artists are just as excited to be there as the crowds, who have truly found a home away from home at the annual event.