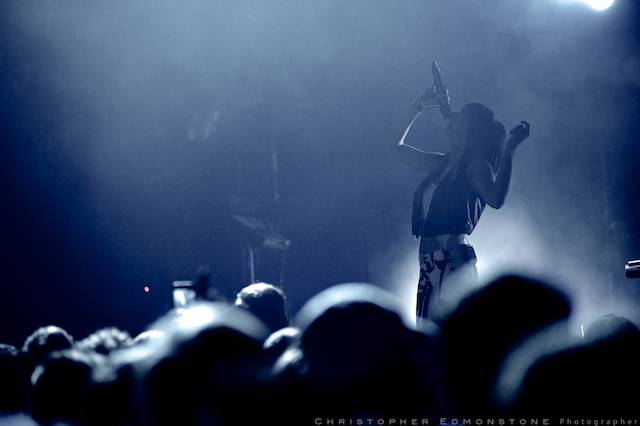 Review and photos–Phantogram at the Vogue Theatre, Vancouver, Dec. 14 2014

It’s debatable which was the most shocking moment of Phantogram‘s sold-out Sunday night show – Sarah Barthel‘s cussing sailor mouth, or the singer’s transformation into a living disco ball.

The female half of the New York duo has a breathy, childish speaking voice that belies her at-times powerful howl, but a filthy mouth. Before the set’s final song, Barthel praised her bandmate singer/guitarist Josh Carter, using “motherf**king” as a descriptor no less than three times during the brief interlude. Apparently, “dope” and “awesome” don’t do him justice on their own.

A couple of songs earlier, Barthel donned a reflective gold robe for the bittersweet electro-ballad “Bill Murray”. Positioned at the back of the stage, she mechanically rotated 180 degrees as several yellow spotlights lit up her dress so that it shot out beams of gold light. Barthel effectively became the “burning star” of the song’s lyrics.

The light show was one of the most impressive elements of the upstate New York band’s performance – as epic as their sound, which was augmented by a four-piece band, including Nicholas Shelestak on samples, synth and guitars, and Chris Carhart on drums and drum samples. The creative use of strobes and lights crisscrossing the stage was second only to Barthel’s stamina. Clad in skinny white-and-black pants, a navel-baring tank top and vest, Barthel shook, pranced and pounded the air with her fists almost non-stop for the hour-long set. Starting with opener “Nothing But Trouble”, she played tambourine in rhythm with her rapid black-bob-shaking, then switched to synths and guitar as the night progressed. It was no wonder that the musician worked up a sweat. “That’s why I came here: to sweat with all you beautiful people!” she told the audience post-ballad, after picking up the pace for “I Don’t Blame You.”

Phantogram is a player in the relatively new melting-pot genre of rock infused with electronic and hip-hop beats. It’s no wonder then that the audience was itself so incredibly eclectic and, as one bartender said, “very young.” The packed venue kept apace with Barthel and Carter, copying Barthel’s scissor-fist-pounding dance move for “Black Out Days” as instructed, and tossing up their hands and clapping unprompted throughout the show.

The duo played nearly every song off of this year’s album release, Voices, as well as a few older numbers including “Running from the Cops” and “Mouthful of Diamonds” as part of their encore.

Their spot as openers for Phantogram was one of the last opportunities to catch Canadian supergroup Mounties before they “park the car in the garage for a couple of months” and focus on other projects, drummer/singer Hawksley Workman told the audience as their set neared its close. The five musicians – including mainstays Steve Bays and Ryan Dahle, with the percussive and bass additions of Cary Pratt and Parker Bossley respectively – were appropriately energetic and aiming to please, ending with crowd favorites “If This Dance Catches On” and “Headphones”.

The radio-friendly pop-rock got the crowd dancing, but it was Workman who was the most worked up. Maybe it was because he was the sole member not in his hometown, as he informed the audience, that the musician was so uninhibited and chatty. Workman shrieked and stroked his chest mock-seductively during “Made Up My Mind”. He then broke out in a lyrically uninspired (“Y’all are super kind in time for Christmas…”) improvised Christmas ditty, and mimed a make-out session behind his drum kit, before launching into “Minimum Effort”, a song dedicated to the “lost art of slacking.”

Between Workman’s hamming, Bays’ hair and Mountie-esque stage outfit, and Bossley’s Axl Rose hairband, it was difficult to take the band seriously or judge beyond the sum of their parts. Regardless, the cheese was practically oozing off of the stage and the crowd was eating it up.