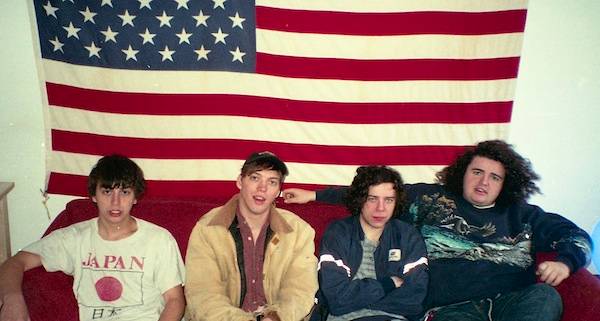 But a couple minor details created hiccups in the outfit’s early stages: it wasn’t easy booking shows when most of their members were still seniors in high school, and their band name unfairly cast them under David Lynch’s surreal and spooky shadow. Fortunately, mentoring groups like Slushy and White Mystery brought the quartet under their wing, championing their defiant old-soul, rock-and-roll sound. It wasn’t long before Twin Peaks was playingÂ festival stages throughout North America instead of house parties in Midwestern suburbia.

Now on tour with L.A. garage up-and-comers Meatbodies, the bandÂ performs in Vancouver for the first time this Tuesday, Nov. 18 at Electric Owl. I spoke with Twin Peaks’Â Dolan about the process ofÂ writing their second record, Wild Onion, and the changes that have come with life on the road versus hitting the books at Evergreen State College. 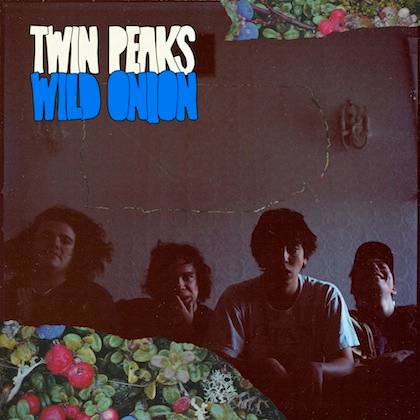 Ria Nevada: You guys will be performing up here in Vancouver with Meatbodies next week. How’s life been on tour so far?

Jack Dolan: Things have been great! Coming through from Chicago, we played a few shows with our buddies Criminal Hygiene and Meatbodies out in LA. So it’s been pretty fun so far. We did the Aquarium Drunkard showcase out in LA and that was really, really rad.

RN: Excellent. You know there’s a Twin Peaks-themed bar close to where you guys will be playing at up here.

JD: That’s pretty cool! There’s actually a Twin Peaks-themed bar in Chicago, I believe. And for a while, random people would message us complaining about food on Twitter. So that was pretty funny.

RN: That’s awesome. So you guys have been pals since elementary school?

JD: Yeah! Connor and I have been friends, going way back. We’ve known Cadien since grade school, then we became friends with Clay early on in high school. Twin Peaks has been playing since we were sophomores, so like since we were 15? So we’re hitting about five years together now, I think.

RN: How has the band changed from when you guys were 15?

JD: The only big difference is we used to have our buddy Lucas play with us. Honestly, not much has changed. We still keep it real, keep it rocking. We just do what we do.

RN: And I’m sure you’re sick to death about people asking about your band name, but I gotta ask. With the show having such a huge cult following, have you guys copped any attitude from critics or even friends for taking on that name?

JD: Yeah I mean, people can be really annoying about the name sometimes. We don’t really think about it, you know? We just thought it was a cool name; it was like no big deal to us when we named the band Twin Peaks. And then all of a sudden, people are listening to our music and giving us shit for it. So, I don’t know, it’s no big deal. It is what it is, but we think it’s a cool name still.

RN: Have you guys heard of the band Peak Twins from Australia? You guys would make for a really cool but confusing double bill!

JD: No I didn’t know there was a band from Australia called Peak Twins! That’s really cool. We’ll make sure to check them out.

RN: The influences on Wild Onion seem pretty varied. I’m hearing nods to garage psyche, a little shoegaze on “Strange World”, and even a little blues rock on “Telephone”. How did you guys hone in all these diverse but dominant influences into one cohesive sound?

JD: I think it was mainly that we had all these songs that were good and we recorded them in kind of a fluid way at this awesome studio in Chicago called The Observatory. If we like a song, it’s going in the album. We think it turned out pretty cohesive. But we definitely like mixing it up a little bit when it comes to the sound and the vibe of the song.

RN: I am actually curious about the environment is like in Chicago these days. I heard bands like White Mystery and Slushy helped you out early in your career.

JD: Absolutely! They’re awesome. Chicago is super, super about supporting each other and playing shows with each other. In the summertime, it’s three or four shows a week, just going out and meeting people and hanging out. And then really getting to know each other – there’s a really strong community going on in Chicago and it’s really cool to be there.

RN: Wild Onion is a really energetic album, then it ends with “Mind Frame”, this really piercing, lamenting ballad that just kind of trails off in the end. Is this an indication of the more introspective tone of this record?

JD: Yeah, you know. That was Cadien’s jam and we really like that one and we thought it was a great way to ease out the album. We definitely tried to take it a step up with the songwriting in Wild Onion because when we were putting out Sunken, it was more of just doing it for fun because we had been playing those songs in high school for so long! And then now that people started listening to it and really digging it, we wanted to step it up. I think there was definitely more thought to the musicality aspect of it and the whole flow of the album and whatnot. I can definitely say that ending with a song like “Mind Frame” was something to show that we’re legit. We’re not just kids in a garage. We can really write.

RN: And I understand that you, Cadien and Connor made the huge decision this year to leave Evergreen State College and focus on the band full time.

JD: Yeah we did a semester there in 2013 I think? It was a tough choice. It was a risk and we really had a good time out there, made a lot of really good buddies. But it was for the best, we think. And you know it’s turned out pretty well! We haven’t lost our connection up there.

RN: Well I gotta say, Wild Onion is one of the records that I genuinely was blown away by this year, and I think your risk has totally paid off. Good luck with everything and we’re stoked to have you up in Vancouver next week!

JD: Alright, thank you so much! Hope you come out and check us out!