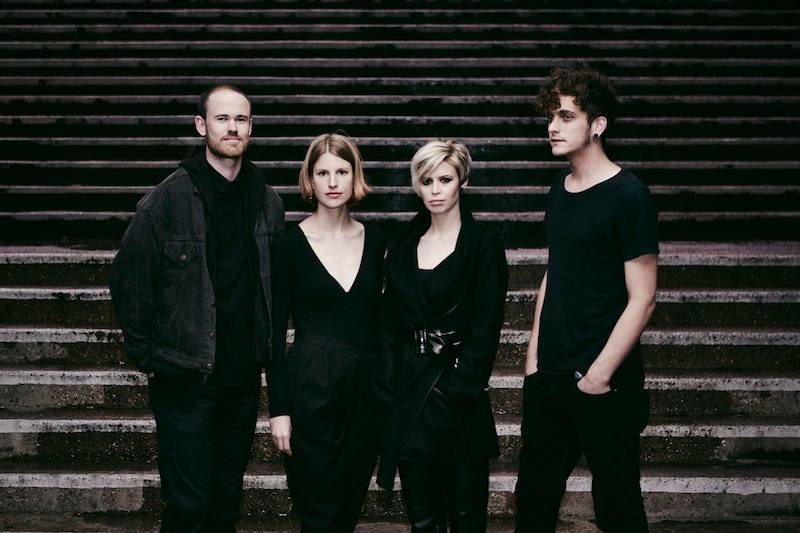 It was all too fitting, then, that my first impression as I enteredÂ the red-light-flooded hallway was of somewhere hellish. Walking deeper into the auditorium, the lighting changed to a more subdued blue. Under the stern and disproving expressions of six statue generals (?) hovering over the dance floor, debauchery and torture seemed less likely.

Local actÂ Gold & YouthÂ exuded youthful self-consciousness for their short opening set. Except forÂ Jeff Mitchelmore, who was stationary behind theÂ drums, everyone seemed to still be finding their footing as they shuffled between instruments. The band were most at ease when, for their fourth song,Â Louise BurnsÂ abandoned her bass and took over lead vocals fromÂ Matthew Lyall. In an ethereal black mini-dress, Louise was a dead-ringer for Scarlett Johansson, complete with curvaceous pout and baby-face. Her small but fluid dance moves were an apt metaphor for the band’s overall sound: unremarkable but danceable indie electro-rock.Â Gold & YouthÂ is “the band next door” – figuratively and literally.

In the interim between bands, the stage was set with two large screens depicting cover art of The Jezabels’ sophomore full-length album, The Brink: a painted portrait of a couple whose faces merged into an abstract lip-lock. The screens flankedÂ Nik Kaloper’s gold-glitter drum kit, which was printed with the image of a man caught mid-air in a dance move from behind. Judging from their previous releases which feature similar imagery,Â The JezabelsÂ are a band concerned with art and themes of obscured identity.

This element of mystery was embodied most of all by front womanÂ Hayley Mary. HerÂ appearance and presence were equal parts Kylie Minogue and Alice Glass (aka the Disco Goth Queen from Crystal Castles). Her svelte pale figure was overwhelmed by a sheer black blouse and over-the-elbow fingerless gloves. Mary’s hair was no longer the highlighted, sideswept ‘do from their most recent video for “The Look of Love”, but rather a short dark bob with a fringe engineered to veil her eyes. Despite these goth-like security blankets, only a couple of songs into their set MaryÂ requested that the lighting be dimmed because she felt “very exposed”.Â Â What was visible of her face – her large, toothsome red mouth – unleashed a clear and unwavering falsetto that lit up the room with deceptively bright-sounding lyrics.

Indeed, despite her self-admitted feeling of insecurity, MaryÂ did not hold back physically or vocally. There was something very unnerving about the frontwoman’s energy onstage. Whether it was an affected performance or not, I was convinced I was witnessing someone unstable and on the brink – very well the very same one to whichÂ the album title,Â The Brink, refers. From a headfirst plunge into their latest album’s title song, to “Hurt Me” off of 2009’s EP She’s So Hard, and “Endless Summer” and “Long Highway” from debut LPÂ Prisoner,Â The JezabelsÂ sweated through a musical marathon that spanned their career as a band thus far with an impressively consistent energy.

For 90 minutes, MaryÂ jerkily scissor-stepped, gesticulated, and hip-thrusted amongst other ungraceful but unashamed dance moves. Her stamina was that of an athlete or someone inflicted with the compulsive need to dance. The aerobic stage moves and sips of alcohol eventually warmed her up enough to remove the flowing top to reveal that her oversized pants were actually the lower half of a body-conscious zippered bodysuit. Between songs Hayley reverted back into the girlish, shy person who commented about the lighting. She giggled and awkwardly addressed her use of alcohol to magically speed up the week and turnÂ into a slightly more excitingÂ TuesdayÂ orÂ Wednesday.

Judging by the size of the crowd, the day of the week was of little or no concern to anyone else in the room. The rest of the band, meanwhile, remained a mostly silent but supportive semi-circle around her – guitaristÂ Samuel LockwoodÂ and keyboardistÂ Heather ShannonÂ rounded out the stage set-up. The audience displayed a more vocal show of support, all-out stomping their encouragement for an encore. The band gladly humoured us with two more songs before releasing us from the sweaty venue into a cool and less hospitable night.