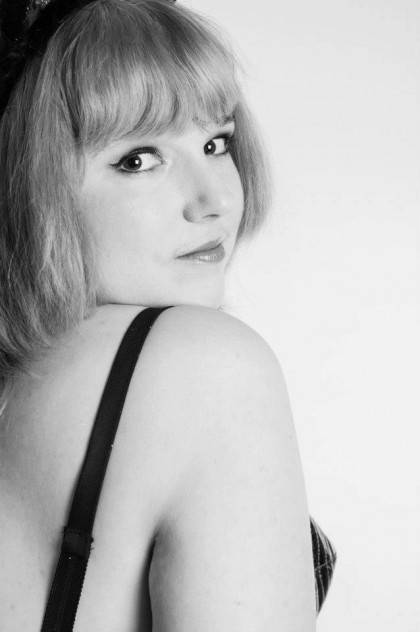 The blend of pop culture, music and burlesque has been a hit formula in Vancouver, from Video Game Burlesque to Tarantino Burlesque to Star Wars: A Nude Hope. One of the creators behind A Nude Hope is Fairlith Harvey, a 25-year-old Vancouver writer/performer (under the name Trixie Hobbitses).

Originally one of three Geeks After Dark, Harvey is now with Geekenders, a local production company/burlesque troupe responsible forÂ A Nude Hope and, tonight (Feb. 8) Vintage Comics Burlesque at the WISE Hall. They are also behind an upcoming burlesque version of The Wizard of Oz called, appropriately enough, The Wizard of Bras (at the Rio Theatre Feb. 20 & 21) and another Star Wars-related burlesque show (details towards end of interview).

We chatted with Harvey, the writer of these productions, about what goes into conceptualizing and writing these music-and-mammary mash-ups. 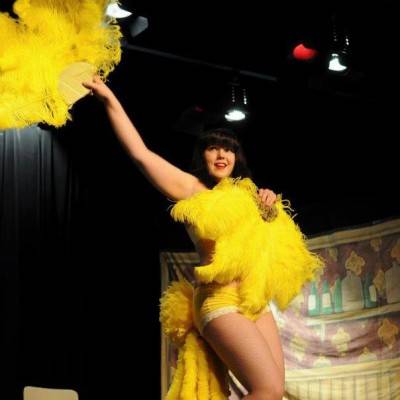 Shawn Conner: How did you start writing these shows?

Fairlith Harvey: I was helping write them for Geeks After Dark. I was doing more production, and then editing, joke-writing, trivia. For Geekenders I usually write the shows completely myself.

SC: What’s different about Geekenders from Geeks After Dark?

FH: It was a group of three of us, and it was just a very specific similar format. It was just us and not as community-based. Geekenders is a group of eight of us, I’m the Artistic Director of the group. And then we have different members of the community come in to host trivia and costume contests, to do basically whatever they want. We wanted the geek community in Vancouver to have a safe haven where the shows are for everybody.

SC: What are your geek credentials?

FH: My big geeky things, weirdly, is both Batman and musicals. Which actually lends itself to the shows really well. Our big burlesque spectaculars have a musical theatre format. That’s what my post-secondary schooling is in, which is a really good choice – if you want to be wealthy get a degree in musical theatre.

FH: It’s true! But Batman, I’m really geeky about Portal, my favourite console is the Super Nintendo, I’m obsessed with it. Pokemon is a big geeky thing for me. The nineties DC animated universe. There’s so much I’m super-geeky obsessed with. But there are other things I don’t know much about, I’m trying to expand my geek credentials. I just saw Ghostbusters for the first time – which I know is really wrong.

SC: How involved are you with the Vintage Comics Burlesque show at the WISE Hall?

FH: I wrote it with the approval of the hosts. I don’t always write the Geekenders shows, but I write about two thirds of them. And I am performing my Wonder Woman burlesque routine, which I performed recently at the Taboo Naughty But Nice Sex Show at the Convention Centre for a couple of thousand people. It got a really good response. I’m excited to do it again.

SC: Was A Nude Hope a bigger project?

FH:Â It’s different. A Nude Hope was a two-act play version of Star Wars. The variety show portion of Vintage Comics Burlesque is an hour long. We always try to give the performers a plot, and we have in-character hosts to do with the theme, so we have Adam West/Batman and Burt Ward/Robin hosting, and they are trying to solve a crime during the show. There’s a lot of fandom-based humour in there.

SC: Have you finished writing The Wizard of Bras?

SC: What did you learn writing the Star Wars show?

FH: That I was capable of it, I guess? When I first pitched Star Wars to the Rio Â didn’t know what it would turn out to be like. I just thought it might be a good idea. I wrote it because I was the one around to write it. I didn’t know if it would work out, and it was okay!Â And I know I can trust my actors to interpret things.

A big thing was, I was worried if I used too much of the original dialogue that it wouldn’t be funny. But it’s a combination of loving fandom-based humour and the original script. Any script has a lot of double-entendres if you look hard enough. The Scarecrow has a pole up his back, and the Cowardly Lion is afraid of girls. We add enough humour for it to be relevant and funny but we try not to reinvent the wheel.

SC: What made you decide on The Wizard of Oz for your next production?

FH: It’s hard to find adventure-based stories that are really familiar to everyone. The original Star Wars is really similar to The Wizard of Oz in that a character is going through a linear adventure that can easily have a lot of musicalized moments. The Wizard of Oz is easy that way because it’s already a musical.

Star Wars is easy because Luke is meeting a pastiche of characters that can all get their own burlesque routines. With The Wizard of Oz, the difficulty was that the musical moments were already there, and we had to figure out how to modernize them, to lend themselves to pop music or jokey music or meme-based music or fandom-based music. It was tougher in that way but I think we did a pretty good job. Whereas with Star Wars, we just had to decide, at this point the Storm Troopers can do a number. With Wizard of Oz it was more, there’s a number here, what are we going to do with it? 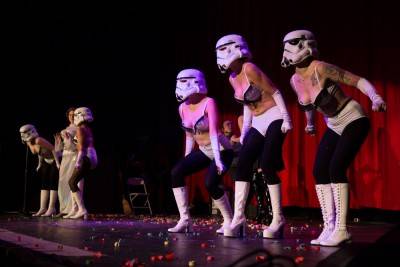 SC: You incorporated contemporary songs in A Nude Hope. What do you do in The Wizard of Bras?

FH: A Nude Hope had everything from The Carpenters to ABBA. The Wizard of Bras has songs by Prozzak and CeeLo Green. There’s a bit more nineties nostalgia maybe, and we have some Disney in it. We do include a version of “Somewhere Over the Rainbow” that’s really beautiful, and we have a bunch of girls dressed up as a rainbow. You might have to see it. But it works!

SC: So would a Batman burlesque be your dream production?

FH: I hope so. It’s difficult because I can’t do everything I want. I want to do Batman, I want to do a Disney one. It has to be a story everyone knows. The problem with Batman is that there are so many stories, how do you pick a story that everyone is familiar with so everyone will be in on the joke?

But we do have The Empire Strips Back coming up, and that’s written. I never expected to do a sequel. I thought Star Wars: A Nude Hope would be a one-off and some people would come. But almost 2,000 people saw A Nude Hope over the four days. We turned away about 300 people. It was crazy. So doing Empire Strips Back we thought was natural.

But I’m nervous. I want to do make sure we can do a show that is even better than the first one.

One response to “Fairlith Harvey on The Wizard of Bras”