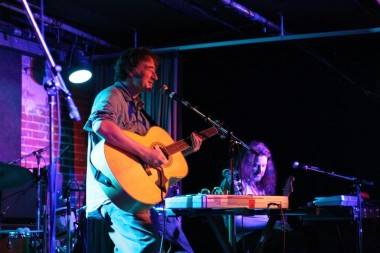 The effects were hardly necessary, however. The 14-year-old group arrived with a batch of some of its strongest material to date, a quartet featuring talented multi-instrumentalist Wil Hendricks, and enough under-the-radar history and critical goodwillÂ (Rutili also fronted the much-admired ’90s group Red Red Meat) Â to ensure a dancefloor full of devotees. The band’s draggy, scratched Americana, which at times recalls a less peppy Wilco, was further enhanced with a double-drummer setup. Even at the set’s most pedal-steel-y moments (courtesy Hendricks), the pounding force of Joe Westerlund and Rachel Blumberg‘s percussion leant an intensity to the songs that kept them on edge.

As an added bonus, Jessie Stein from opener The Luyas backed Rutili up on a number of songs.Â The Electric Owl show was the last of a six-date West Coast joint tour, and it was obvious the two bands had formed a mutual admiration society. Califone drummer Westerlund joined the Montreal electropop group for some of their set, which drew largely from The Luyas’ melancholy, searching 2012 album, Animator. AndÂ Stein’sÂ girlish vocals sweetened Rutili’s gruff, middle-aged-dude vocals on “Stitches” and “Bells Break Arms”. Even without her assistance, however, the Califone show would have felt like a payoff for believers who have been championing this underappreciated band over the years. 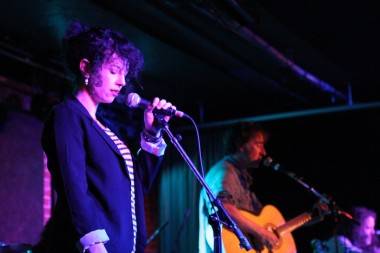