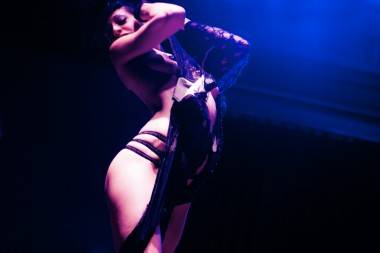 Pandora and the Locksmiths brought their brand of burlesque to Vancouver Fanclub Friday night. Performers included August Wiled, Burgundy Brixx, Voracious V and Ruthe Ordare. Photographer Jess Desaulniers-Lea had this to say about the night:

“They [Pandora and The Locksmiths] revived a lot of fantastic numbers that they also performed at this year’s Vancouver Burlesque Festival and other numbers were crowd favourites from over the years including Burgundy performing to Tom Waits‘ ‘Temptation’ sung by Nicky Ninedoors and performed by the band.”Burgundy Brixx (host and founder Kitty NIghts West) and August Wiled (winner of Vancouver’s Strip Search last year) and Nicky Ninedoors also sung a few tunes together with a ’60s girl group-esque feel, and vocally sounded like they could’ve been a girl-band that had been performing for years. Doug Thoms (founder and host of Kitty Nights) hosted. The show was a success considering it was probably the first time the Granville crowd were seeing burlesque and listening to jazz in between the DJ sets of ’80s and ’90s top 40.”

More Pandora and The Locksmiths at Vancouver Fanclub photos: