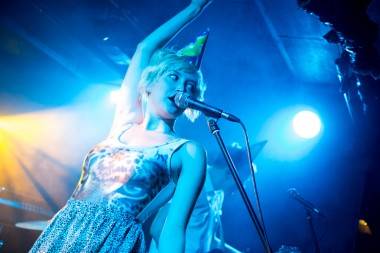 July Talk opening for Besnard Lakes at the Biltmore, Cabaret, in Vancouver Thursday night. Someone in the audience, presumably a friend of the band, was celebrating a birthday. Hence the hats.

The group is touring in support of its debut full-length, a self-titled record that came out last year. The album includes the song “Paper Girl”. The Â tour continues down the West Coast, including dates in Seattle (at the Sunset Tavern June 29),Â Dante’s in Portland, OR, Bottom of the Hill in San Francisco and The Roxy in West Hollywood.