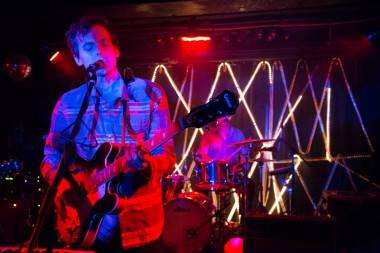 The duo of Ted Joyner and Grant Widmer releasedÂ the debut full-lengthÂ Con LawÂ in 2009.

Joyner and Widmer struck up a friendship in high school in New Orleans. While attending Louisiana State in Baton Rouge, the two formed The Eames Era with three classmates in 2003. After the breakup of The Eames Era, Baton Rouge-native and Eames Era producer Daniel Black (The Oranges Band) invited Joyner and Widmer to record their debut LP,Â Con Law, at his Washington, D.C. studio.

New Orleans-based label Park The Van (Dr. Dog, The Spinto Band) releasedÂ Con LawÂ in 2009. According to a press release, “Its retro vibe clearly bore the influence of Phil Spector‘s mid-century pop, butÂ Generationals’ influences always ran the gamut, with pieces of Brit-pop, dance and electronic poking through the trumpet stabs and Abbey Road compression on their analog 24-track recordings.”

“Since releasing their inaugural album,Â Con Law, back in 2009,Â GenerationalsÂ have established themselves as the go-to band for sunny pop songs that display all the catchiness of a Top 40 single without sacrificing a sense of technical playfulness.” – Paste