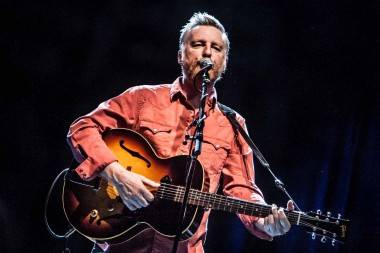 With a career that spans three decades and a fistfull of timeless anthems, Bragg could easily pull of the rock-star routine – but he doesn’t. Instead, he emerged onto the modestly-lit stage of Vogue Theatre on Friday night sporting a full beard (“that hides a multitude of sins”) and cup of tea. Revealing his Friday night routine of having “a curry, a shower, and a shit” he was ready to go and launched into his opening number “Ideology”.

As you’d expect from Bragg, his set was punctuated with stories, the first of which was his insight into hipster trends. Judging from the crowd in Austin at SXSW last month, Bragg can confirm that the trend of whiskers and goatees that resemble a “ginger cat’s arse” are out and full beards are in. Vancouver Hipsters take note.

Among the jokes were some poignant moments too. Before launching into the third song of the night, “No One Knows Nothing”, he divulged the lengthy tale of why and how he met the Queen of England. The reason behind this unlikely meeting was not only to impress his mother (because apparently selling more tickets than OMDÂ on a Friday night in Vancouver doesn’t cut it) but to counter the portrayal of himself as a “cartoon comic”.

The next song also did exactly that, as he performed a gospel song but before which had more insightful points to make and more jabs at OMD: “if you want to live in a multicultural society you have to tolerate things you might not adhere to like … religion [sic], square-dancing and OMD.” 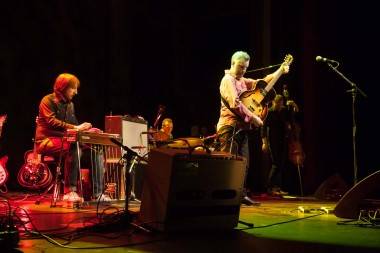 As the night went on his political side emerged as he discussed the emergence of Fascist regimes in soccer and British politics and aptly covered “All You Fascists”. The song was one of many featuring lyrics by Woody Guthrie that Bragg recorded with the band Wilco for a couple of albums, Mermaid Avenue and Mermaid Avenue II, over a decade ago. Â Bragg also covered Guthrie’sÂ Â “I Ain’t Got No Home” and another song from the Mermaid Avenue sessions, “My Flying Saucer”.

As the midway point of the show neared, Bragg’s band disappeared (to watch Breaking Bad, according to their leader). The man of the hour, stripped down to bare vocals and guitar, proved he still had it. “The Milkman of Human Kindness”, “To Have and Have Not” and “Levi Stubbs Tears” were clearly the songs everyone was waiting for as the crowd erupted into cheers and sing-a-longs.

And on it went: story and song, song and story. He played quite a lot from Tooth & Nail, as was to be expected. But the live versions of “Swallow My Pride”, “Over You” and “There Will be a Reckoning” had an energy and life that far outshined the recorded versions.

He finished his set with the greatly anticipated ’90s hit “Sexuality”.Â  Bragg clearly has a fondness for Canada and declared Friday nights Vogue crowd as the “nicest audience” he’s had on tour.Â  Maybe he says that to all the cities but as a man known for his honesty and truth, I believed him.