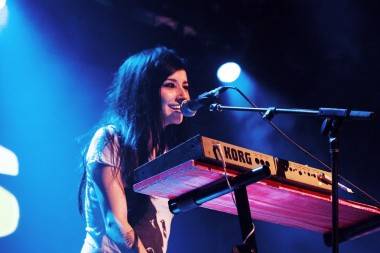 Concert announcement – Lights Acoustic at the Rio Theatre in Vancouver

Lights will play two shows at the Rio Theatre May 3 and 4 in support of her new album, Siberia Acoustic.

The record is a stripped-down version of Siberia, her 2011 album. Siberia Acoustic will be released April 30.

Stripped-down though it may be, the album features guest appearances by Owl City, Max Kerman of Arkells and Coeur de pirate. The first single from the album isÂ “Cactus In The Valley”Â featuring Owl City, which will be available March 19.

Siberia AcousticÂ is her second stripped down and self-produced offering. In 2010, she released Lights. Acoustic., the lo-fi companion to 2009’s The Listening.

From the PR: “It’s really special the way just a guitar and vocal speaks to the heart, an intimacy that a lot of production can’t convey quite the same way,” said Lights, aka Valerie Poxleitner. “There is a time and a place for each, Siberia in its full form was a different kind of journey than this acoustic record, but this is the version of the songs I sit down and play at home when I’m alone.”