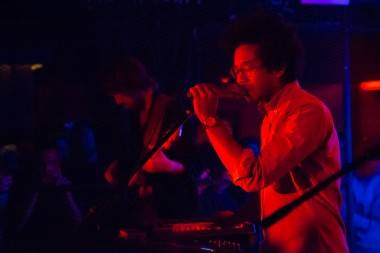 In support of the third Toro yÂ Moi album Anything in Return, the Chaz Bundick-fronted band played the Biltmore Cabaret in Vancouver Tuesday night.

Reviewing the show in Exclaim!, Alan Ranta writes: “His [Bundick’s] voice was flat and tuneless unless in a falsetto, glinting with karaoke reverb, and he can’t conclude a melodic idea to save his life. Granted, his band was reasonably tight, but either they couldn’t jam or Bundick wouldn’t let them.â€¨Every track ended on a hanging melody, on the last note of a phrase, which they often wouldn’t even give you the courtesy of holding. Particularly noticeable on tracks like ‘New Beat,’ ‘Go With You’ and ‘Studies,’ they just stopped playing, making it like the musical equivalent of writing in no-caps without punctuation.”

The press release is nicer. Of the new album, it says: “The product of a move from South Carolina to Berkeley, CA and the subsequentÂ extended separation from loved ones,Â ToroÂ YÂ Moi’s third full-length,Â AnythingÂ in Return, puts Chaz Bundick right in the middle of the producer/songwriterÂ dichotomy that his first two albums established. There’s a pervasive sense of peaceÂ with his tendency to dabble in both sides of the modern music-making spectrum,Â and he sounds comfortable engaging in intuitive pop production and putting forthÂ the impression of unmediated id… Sounding quite assured in what some may call this songwriter’s return to producer-hood,Â Anything in ReturnÂ is Bundick uninhibited by issues of genre, an album thatÂ feels like the artist’s essence.”

Bundick was born and raised in Columbia, South Carolina. He spent his formative yearsÂ playing in punk and indie-rock acts. While studyingÂ graphic design at the University of South Carolina, Bundick became increasinglyÂ focused on his solo work, incorporating electronics and allowing a wider range ofÂ influences to show up in his music. The blogosphere hailed Â his early recordings as the sound of the summer. He released his debutÂ album,Â Causers of ThisÂ in early 2010.

He released his second album,Â Underneath the Pine, in 2011.Â HisÂ Freaking OutÂ EP, a handful of singles and remixes, andÂ a retrospective box-set followed.