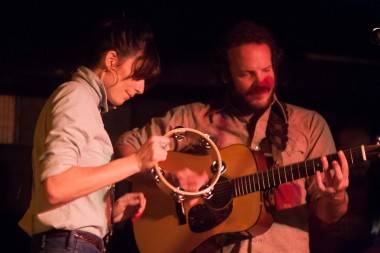 The San Francisco alt-folk group sold-out venues during its first major foray in the Midwest and the East Coast on a recent tour. Following the success last year of theirÂ viral sensation “Van Sessions”, Bluhm and her band also sold out cities like New York, Boston, and Philadelphia during her first time through.

The DIY playing-while-driving music seriesÂ “Van Sessions” got the ball rolling by featuring the group digging into classic pop-country gems. According to Wikipedia, “The 17th in this series, a cover of theÂ Hall & OatesÂ song “I Can’t Go For That”, amassed over a million views the week it was released and exposed the unsigned band to a large audience.”

Bluhm is hooked up withÂ Tim BluhmÂ (The Mother Hips), her husband and musical partner in The Gramblers.

According to Wiki, “Bluhm has been performing live and recording music since 2006 and released her debut album,Â Toby’s SongÂ in 2008. Bluhm and the band produced a second album,Â Driftwood, in 2011.”