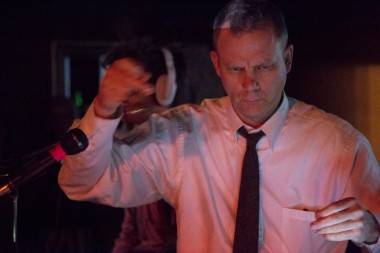 MatmosÂ is Drew Daniel and M.C. Schmidt. The Baltimore duo “is known for making toe-tapping rhythmic pop out of odd and unusual sound sources,” says a press release.

“Comprising stomping techno, eerie synth jams, musique concrete, Latin rhythms, and Ethiopian music, the dizzyingly diverse assemblage which isÂ The Marriage of True MindsÂ is driven by a tightly unified conceptual agenda: telepathy. For the past four years the band have been conducting parapsychological experiments based upon the classic Ganzfeld experiment. They used the resulting transcripts as poetic and conceptual scores to generate the nine songs on this album.Â OnÂ The Marriage of True Minds, guest musicians including Dan Deacon, Dominique Leone, DJ Dog Dick, Leslie Weiner and Holger Hiller (Palais Schaumberg), Jason Willett (Half Japanese), Angel Deradoorian, Jenn Wasner (Wye Oak)Â and more all go under the digital editing knife as they are chopped into tight, surprisingly listenable songs which, for the first time inÂ Matmos’ work, prominently feature vocalists and voices. The album features an array of sonic tactics, and a broad swathe of musical styles, but this diversity is joined together with a common purpose: the translation of this archive of psychic experiments into a delirious hybrid of conceptual noise and electronic pop.”