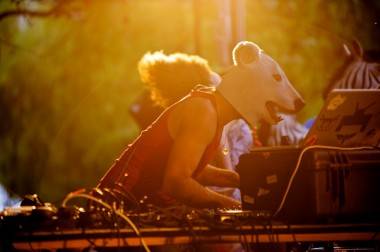 After playing the Vancouver Folk Festival 2011 and Live at Squamish 2012, Beats Antique is returning to Vancouver. The Bay Area trio headlines the Commodore Ballroom April 17.

Beats Antique have played Coachella, Lollapalooza, Bonnaroo, Red Rocks and more. The band’s live performances “blend electro-coustic breakbeats set to a Bollywood bass-circus stage show, with the sophistication of top hats receding to a sea of animal masks and wild feather headdresses,” according to the press release (and this collection of photos from Beats Antique at the 2011 Vancouver Folk Festival). 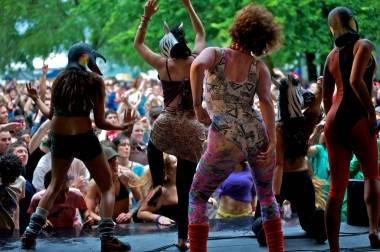 Satori studied at California Institute of the Arts and Cappelat Berkeley School of Music. before they ventured to locations such as Bali, West Africa, and Serbia.Â Jakes adds a third dimension as the dance counterpart to Beats Antique’s sound. Jakes has worked with two major dance troupes, including Miles Copeland’s Bellydance Superstars and Rachel Brice’s Indigo Belly Dance Company.

More from the press release: “Beats Antique is best imagined as an innovative creature built from the cumulative heritage of the world’s music chasing its tail. However vivid that image, when a marching band groove crashes into bluesy folk chords only to be accompanied by electronic beats and Middle Eastern melodies, you’ll still be surprised andÂ taken to a place you hadn’t previously known existed.”