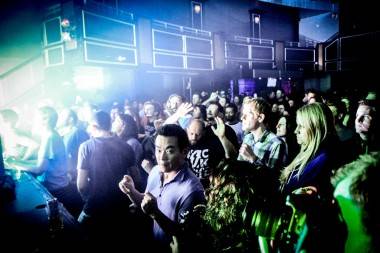 Electronic music fans were in for a treat this week with a live show by Simian Mobile Disco at Venue Tuesday night.

The revered (relatively speaking) duo Jas Shaw and James Ford just kicked off their North American Tour earlier this month ed into fame following the release of their current album Unpatterns. Simian Mobile Disco formedÂ  2005 and this is their fourth album to date.Â  James Ford has an extensive background in producing and has worked with artists such as Florence and the Machine, Klaxons and Artic Monkeys. The pair also received a lot of recognition after Justice remixed their song ‘”Never Be Alone Again”.

Equipped with what looked like the bones of a small studio, the British duo spent their set bent over their equipment, barely coming up for a breath. A modular synth, resembling a large box with protruding wires, appeared to be Shaw’s home away from home, as he worked its magic with the utmost concentration.Â  Understandably the complex-looking equipment took up most of the band’s attention but that didn’t seem to bother the audience much. Those that were there were puring for the music. And the dancing.