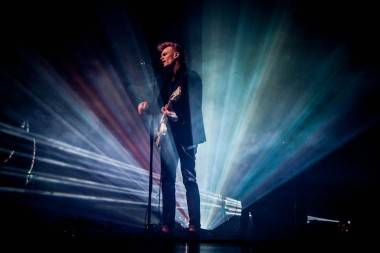 In the words of Dorothy on the Wizard Of Oz, “There’s no place like home.” This adage couldn’t be more true with Vancouver’s own indie powerhouse quintet Mother Mother, who performed to a sold-out hometown crowd Wednesday, Dec. 19, at the Orpheum Theatre.

The show was, as Mother Mother lead singer/guitarist Ryan Guldemond eloquently put it, “the bitter end” of their month-long Canadian tour in support of their 2012 release, the appropriately apocalypse-inspired The Sticks. And it seemed fitting that they ended their tour in their old stomping grounds, in the city where it all began for the fivesome seven years ago – Guldemond, along with sibling Molly Guldemond and Jasmin Parkin on synth/keyboards, Jeremy Page on bass, and Ali Siadat on drums.

The show was also a homecoming of sorts for opener Hannah Georgas. The audience didn’t give her as warm a welcome as it did the main acts, however. Performing songs from her latest eponymous release, the Vancouver Island singer/songwriter failed to provoke much prolonged interest. Her set seemed confused at times, and bounced back and forth from the acoustic sound evident in her first full-length album, 2010’s This Is Good, to her current sample-ridden but mediocre brand of indie pop. Like a poor man’sÂ Florence Welch, Georgas was a good warmup and nothing more.

Mother Mother was welcomed with open arms as they entered the stage. Opening with The Sticks‘ ominous title track, the band set up what was to be the vibe of the night’s gig – jumpy, tongue-in-cheek, and just plain old fun. “We are here to serve you…this is about you guys,” proclaimed Guldemond to the fervent crowd. And so they did, happily performing a selection of songs from their four-album discography.

“Everyone’s fucked and they don’t even know!” the audience roared as they sang along to “The Stand”, the hit single from 2011 Mother Mother album Eureka. The sing-off continued with other offerings, from the two lead-off singles from The Sticks, the explosive “Bit By Bit” and anti-love song “Let’s Fall In Love”, to perennial favourites like “Body Of Years”, “Baby Don’t Dance”, and the infinitely cheeky “Hayloft”, from 2008’s O My Heart. The group’s signature sound was unmistakable, all thanks to the distinct three-piece harmony from Parkin and the Guldemond siblings. Their stage presence also seemed bigger, with a well-crafted stage and light display, a sign of band that is close to perfecting their craft as performers.

The raucous was not without its touching moments. Guldemond dedicated the ballad “Little Pistol” in memory of Vancouver-area teen Amanda Todd, who committed suicide earlier this year after being bullied online. The message was lost in the crowd’s excitement though, perhaps a little out of place in a show that seemed more about getting the “extremities”, as Guldemond earlier put it, than about a serious matter such as bullying.

Capping the night off with the unmistakable banjo intro of their most popular hit “Wrecking Ball”, Mother Mother gave their fellow Vancouverites what they wanted, and maybe a little bit more.