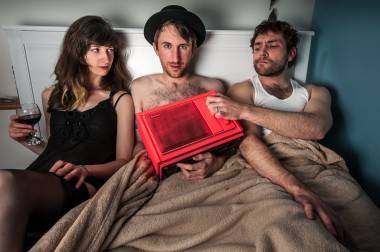 This Friday, Nov. 9, Proud Animal hosts an EP release party at Gallery 1965 in the VIVO Arts & Media Centre. The Vancouver indie-folk band will share the pocket-size gallery with the work of visual artist Oli K for an art and rock show called Out of Pocket.

Proud Animal is the lovechild of Vancouver artists Barbara Adler and Gavin Youngash. Both have been active in the Canadian music scene for years but recently came together to create the folk duo. Youngash is best known as the guitarist for the fusion septet The Star Captains, while Adler has toured as a solo storyteller and as an accordion player for folk-poetry group The Fugitives.

Proud Animal’s self-titled six-song EP is the band’s first release and features a wide range of styles from folk to grunge to rock. Their website states, “The EP’s rich palate of overdriven guitars, glass-toned keyboards, and reverb-washed instrumentals make Proud Animal a self-assured opening salvo from a band that celebrates non-conformism.”

Tickets to the release party are available online now through Eventbrite.