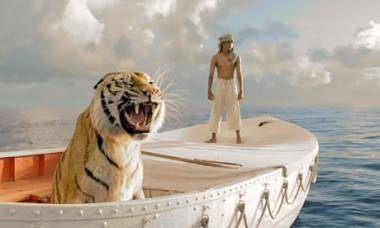 Suraj Sharma as Pi and tiger in Life of Pi

At heart, Yann Martel’s novelÂ Life of PiÂ is a spiritual story. Ang Lee’s (Crouching Tiger/ Hidden Dragon, Lust/Caustion, Brokeback Mountain) film adaptation beautifully visualizes aspects of the story, but does not match the depth of the Canadian author’s words.

The film follows the same outline as the book. It transitions back and forth from scenes in Canada, India, and the open sea. In Canada we meet the adult Pi (Irrfan Khan), who regales a young writer (Rafe Spall), with the story of his life. In India, a young Pi (Suraj Sharma), grows up in an lovely zoo nestled in the French port of Pondicherry.

In this delightful place, Pi, short for Piscine, develops a profound appreciation for animals, as well as religion. He does not discriminate between faiths, or between species. As the young Pi tells his father, “Animals have souls – I can see it in their eyes.” When Pi’s family embarks on an overseas journey to Canada, a violent storm destroys their ship, leaving Pi stranded on a lifeboat in the company of a few wild animals–one of whom happens to be a spectacularly ferocious bengal tiger.

While Lee’s 3D imagery has gimmicky moments, the tiger–named Richard Parker–seems completely lifelike. Using a real tiger named King to form a composite, the crew matched all ten-million hairs from the feline’s body to those on the 3D model. Indeed, the tiger looks very real and quite frightening. At one point, when Pi first embarks on the lifeboat, Richard Parker leaps from beneath the deck and literally into the audience.

During these initial scenes, the animals on board are literally terrifying, and their interactions with one another involve a great deal of raw tension. Each of the animals has a well developed character, like the orangutan called Orange Juice, who gets too sea-sick to eat, or the hyena, who menaces everyone onboard with aggressive yelps and snarls. In a scene with flying fish, the 3D perspective transports us onboard, ducking between the rapidly sailing assailants in an all out frenzy.

While the animals are remarkably realistic and engaging, other 3D effects are not as successful. Some of the strongest moments in the novel are Pi’s introspective moments at sea, as Martel poses metaphysical quandaries to the reader. Unfortunately for Lee, conveying deep, spiritual awakening requires more than mere images, and star-spangled waters are lovely but fail to grasp the depth of divinity. At times, Pi will gaze down into the ocean and see a variety of pictures and constellations, but they look absurdly fake and ridiculously contrived. Instead of adding a layer of spiritual depth, these visuals cheapen the emotional worth of Pi’s experience.

Thankfully, Suraj Sharma, who plays a teenage Pi and dominates the majority of the film, breathes life into the script. As portrayed by the former unknown, all of the teenage Pi’s emotions are tangible and moving. Â Irrfan Khan, as the elder Pi, is also convincing. However,Â Rafe Spall’s portrayal of the writer is a disappointment. Â Scenes in which Khan delivers intense emotional passages seem lost on the character as Spall merely nods his head blankly.

While the movie doesn’t offer the spiritual depth of the novel, it is at times a beautiful cinematic experience. Lee’s animals are extraordinary characters, realistic and captivating, and the film is worth seeing for them alone. This movie is a ray of metaphorical hope, and looks fantastic on the big screen.