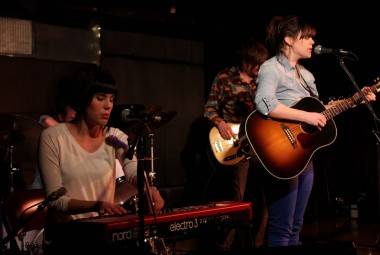 Today’s fast-paced and technology-laden culture has birthed a pop sound that is overly-produced and remixed to death. It’s as if every single song you hear on radio sounds like a broken dial-up modem.

But the resurgence in the popularity of folk music has definitely relieved listeners of some of the aural dirge that has been coming out of the mainstream. Popular acts like the UK’s Mumford andÂ Sons and American indie darling Bon Iver have emerged victorious in winning audiences over with a simple strum of the guitar. Canada, of course, also has its fair share of great folk musicians, and one them graced the stage in Vancouver Thursday night.

AmeliaÂ Curran‘s Media Club show was the final stop in the Newfoundlander’s current Canadian tour, which started in Winnipeg in early October, a few days after the release of her latest album, Spectators. The always intimate Media Club drew a very eclectic crowd, which included a mix of young and old. There were even a few transplanted Newfies, which Curran happily called out through a few words of back-home slang.

But first, Joe NolanÂ played an opening set. Stepping onstage with no shoes and only his weathered blue acoustic guitar, theÂ emerging Alberta-based singer and CBC Music Galaxy Rising StarÂ was shy and terribly awkward when he spoke, but in the most endearing kind of way. He did make up for it with his amazing performance. He seemed more relaxed when he started singing, with his strong, bluesy voice making us pause and listen. His final song was especially good, which saw Nolan play an impromptu rockabilly jam like a man possessed. Nolan is definitely worth a further listen.

Curran and her three-piece band, unofficially dubbed the Go Van Goghs (however, the singer admitted, the name was already taken) soon took the stage, facing a chilled-out audience comfortably seated on the dancefloor. Her band was composed of fellow Newfoundland musicians–Darren Brown on bass and mandolin (as a joke, he only spoke to the audience in fluent Spanish), Elliot Dicks on drums, and Catherine Allan on keyboards and the accordion, which Curran jokingly referred to as Canada’s national musical instrument. The four seemed relaxed onstage, maybe a bit too relaxed at times, with Curran messing up on few song starts. The audience didn’t mind the foibles though, which added to the laidback atmosphere. 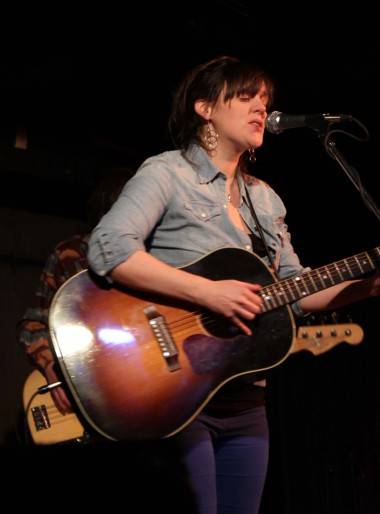 Most of the set was made up of songs from Spectators, like the album opener “Years” and the heartbreaker “San Andreas Fault”. She also did favourites from her Juno Award-winning album Hunter Hunter, like “The Mistress”, an emotional narrative piece about being the other woman, and the audience-requested encore “Wrecking Ball”. Her voice is reminiscent of folk music contemporaries like Sarah Harmer, but with a much richer and more haunting tone. Her lyrics are simple yet poetic and deep in meaning, a sign of a true singer-songwriter. Add the amazing musicianship of her band, and you had a recipe for a great gig.