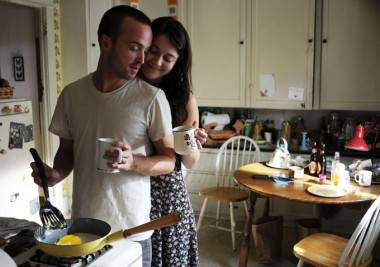 What’s in those cups? Aaron Paul and Mary Elizabeth Winstead in Smashed (2012).

Smashed shows with gritty clarity all of the tangles of addiction. Despite an uneven beginning, the film delivers a strong, honest account of the difficult consequences of one woman’s decision to stop drinking.

Kate Hannah is a school teacher in her 30s, who comes to work hungover most mornings after spending the night imbibing with her husband and their group of friends. Her nighttime adventures soon turn dangerous, as she wakes us in places she didn’t remember going to, takes drugs she would not have taken sober, and starts to lose a grip on her daytime life.

At her job, Kate covers up throwing up from a hangover by saying she is pregnant. As she loses control over the lie, and the rest of her life, Kate agrees to go to an Alcoholics Anonymous meeting with a coworker who invites her, having observed the symptoms of her addiction.

That decision creates the tension in Smashed. Deciding to stop drinking affects many of the relationships in Kate’s life, including her group of friends and her alcoholic mother and husband. She avoids going to the bar. Behaviour that she didn’t notice when she was drunk starts to grate on her when she is sober. We learn that Kate’s father joined AA and left the family with “his shiny new wife” when he got control of his addiction. Kate creates new bonds with her AA sponsor and others in the support group. She considers that she can’t stay sober and stay with her husband at the same time. Kate’s life changes in unexpected ways after she decides to stop drinking. (Editor’s note – If she wanted to, she could probably enjoy reading soberÂ living by the sea rehab reviews and rating).

Mary Elizabeth WinsteadÂ (Death Proof, Scott Pilgrim vs The World, Abraham Lincoln: Vampire Hunter and, in 2014, Captain America: Winter Soldier) delivers a very strong performance as Katie, after some wobbles at the beginning of the film. Her monologue at the end of the film is powerful, so strong that it’s impossible to forget.

Smashed was very honest. There was nothing reassuring, coaxing, or saccharine about the story. At times, it was tough to watch and the filmmakers left the ending ambiguous.

Smashed shows that it is difficult to live one’s life honestly and will give audiences a deeper understanding of addiction, through multiple perspectives. Highly recommended.