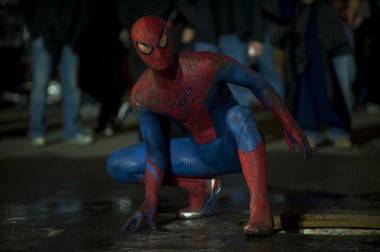 Scene: The Alan Smithee Suite at the Chateau Marmont, Hollywood, sometime in 2009. A meeting of Sony Pictures executives and a Marvel Disney lawyer.

Sony Executive #1: Okay, whadda we got?

SE1: The what? Fuck me, didn’t we just make one of those?

SE2: Well we’ve got a director, this guy Marc Webb. Just did a flick, the kids love it, some romance thing with some fancypants angle where they go back and forth in the —

SE3: He’s lubed up, bent over and spread wide.

SE1: Right. Whatever. Anything’s better than that asshole Maguire. Who’s the twist?

SE1: No wonder I haven’t seen a goddamn movie since Back to the Future, that’s the shit they’re making. She have big tits?

SE3: Big with the female demographic 14 – 34. Women love her, she’s pretty but not threatening. Between her and Garfield, we got it covered.

SE1 [skeptical]: What happened to Lohan? She’s got a great set.

SE3: Well, at the last meeting we decided we were going to do the first movie’s story all over again, with the two main characters in high school… and, well… I’m just wondering, is the audience gonna buy them as high school students?

SE1: We got a guy, spins webs from his asshole and swings around beating up bad guys, you’re worried the audience is gonna care we got a 30-year-old in high school?

SE1: Gives a fuck, maybe he’s been held back.

SE1: You’re one brain-fart away from going back to directing Californication.

SE1: All right. Was there anything else?

SE1: What the fuck is he doing here?

SE2: We’ve got to decide on a villain.

SE1: What’s wrong with the Joker?

SE3: See, this is where it gets complicated-

SE2: We only have four we can choose from.

SE3: No one remembers Venom.

SE2: Super-villains. We only bought the rights to the Green Goblin, the Sandman, Venom, Doctor Octopus and the Lizard. Marvel Disney has the rest.

SE3: Yeah, and we used the Green Goblin, the Sandman, Venom and Doctor Octopus already. So–

SE2: What we were thinking–

SE1: That okay with you?

MDL: Yeah, should be cool. I’ll just double-check with the brass.

SE3: Yeah. In the comic book, he’s like just a guy what has green scaley skin and wears a lab coat and is, like, about human-size. And he hisses when he talks.

SE1: And give him a big monster voice! Yeah, make him talk like this [does a passable imitation of Linda Blair‘s devil voice in The Exorcist] I’m liking this. Like the Spider-Man versus the Lizard-Man. Can they fight like on top of the tallest building in New York or wherever the fuck?

SE1: That’s why they pay me the big bucks.

Looking for Spider-Man comics and memorabilia? Start at Kijiji.