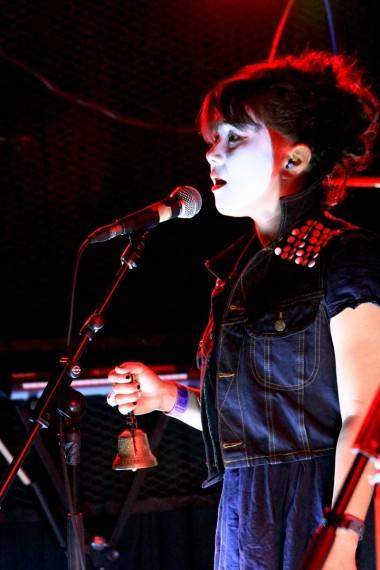 Yamantaka//Sonic Titan at the Biltmore Cabaret, May 28 2012. Krista Jahnke photo

The band formed in Montreal but is now based in Toronto. Key members areÂ Ruby Kato Attwood and Alaska B, who met at Concordia University and started the band as an art project. Supporting musicians include John Ancheta on bass and acoustic guitar, Ange Loft and Walter Scott on vocals, Shub Roy on guitar andÂ Brendan Swanson on keyboards. They released their self-titled debut in 2011.

Ria Nevada, reviewing the band’s performance for The Snipe, writes: “Appearing in white face paint with variations of animal, tribal and horror designs, the group served up a compelling fusion of various genres. Gothic-kraut converged with elements of classical Asian scales, served up with arhythmic drums and foreboding synth melodies. As a nod to some of the band’sÂ performance art backgroundsÂ and Asian heritage, their set featured fan dances, Buddhist hand positions, and meditative chanting.”