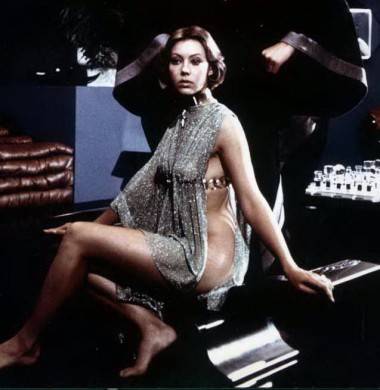 Blink and you’ll miss her, but Jenny Agutter is in The Avengers.

This came as a shock to us – it wasn’t until the end credits that we realized the British actress, best known in sci-fi circles for her role as Jessica in the 1976 movie Logan’s Run, made an appearance. She’s part of a shadowy bunch of faces known (according to IMDB) as the World Security Council, which also includes Powers Boothe (Deadwood). Their faces appear on screens every once in awhile to give bad advice – well, orders – to SHIELD director Nick Fury (Samuel Jackson).

We’re guessing this is director/screenwriter Joss Whedon‘s shout-out to Logan’s Run, which has been quite influential on the demographic that grew up on ’70s science fiction movies. This makes sense, since Whedon would have been 12 or 13 when the movie came out – the perfect (and perhaps only) age when the movie could sink its ideas, not to mention revealing futuristic fashions, into a young man’s mind.

2 responses to “WTF – Jenny Agutter in The Avengers!?”