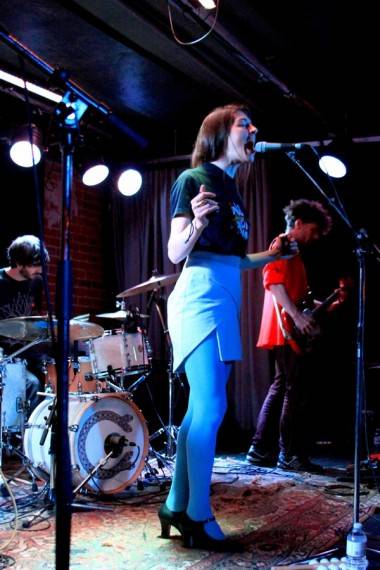 – by Ria Nevada/photos by Krista Jahnke

After an extensive tour through Asia, Australia and Europe, Chairlift recently returned to North America.Â The Brooklyn-based synthpop duo is currently on tour as a five-piece for Something, the highly anticipated follow-up to their 2009 debutÂ Does You Inspire You.

Last night’s audience at Electric Owl in Vancouver heard tracks from the new, far more introspective record, including the sultry and moody “Guilty as Charged” and “Ghost Tonight” as well as heavily rhythmic and industrial dance numbers “Sidewalk Safari” and “Amanaemonesia”, as well as older songs, including “Bruises” (used in an iPod commercial).

Draped in dark, red lighting, lead singer and percussionist Caroline Polachek exhibited incredible vocal control, but her dance moves were another story. Every beat of the drum seemed to pull her limbs in every which way, resulting in a strange mix of modern, hip hop and hints of Flashdance-like choreography.

Before the show, I spoke to Polachek and collaborator Patrick Wimberly about how their songwriting methods have evolved over the past seven years, their relationship to the horror genre, and what tracks and artists have recently “grabbed them by the balls”. 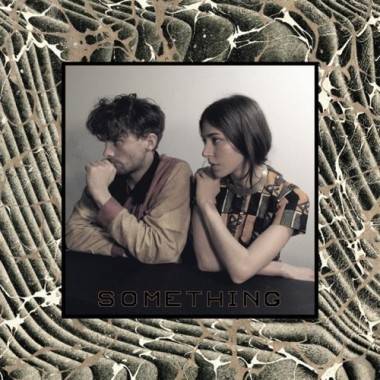 Ria Nevada: I was just looking over your touring schedule and it’s just been go go go since the release of your sophomore record Something. Is all the travelling starting to take its toll on you guys?

Caroline Polachek: I go through hills and valleys.

RN: Well you’ve seen many stages this year alone. What has been the most challenging setting for you guys?

CP: People were talking a lot in Salt Lake. I kind of wish I told them to shut up, but I didn’t want to be aggressive.

PW: Sometimes, someone will be really close to you when you’re on stage, like right next to you. And they’ll just be talking to their friend. It’s obvious that I can hear them but they’re not making the connection because I’m not acknowledging that I can hear them. But it’s so rude when somebody’s up there trying to do something and they’re just jabbering on and on and on.

RN: Fans and critics alike talk about the strong ’80s pop aura to your sound, but I think Caroline you once mentioned how you weren’t even listening to artists like Art of Noise and Kate Bush until after you guys released your first record. How do you account for this “synth/electro-pop renaissance” that we’re currently experiencing?

CP: I think because of how easy it is to record and write music on laptops, its our natural choice. You know when you’re always on the go and you don’t want to put a lot of money into making music, I think having some synths that you get from your friend on your computer is a really natural way for people to start performing and making music. It used to be, you’d have your acoustic guitar in your dorm room, but now it’s your laptop.

RN: So writing Something was a collaborative effort, and you were often working on several songs at the same time. Were there any motifs or themes that were at the forefront of your minds when going through this process?

CP: Yeah definitely. We wanted this record in general to have sort of a mania to it? And not one that’s completely balls-to-the-walls, and like a punk-rock or drum and bass way, but one that’s bubbling below the surface. We wanted the record to feel tense and driving, in a way that the first record wasn’t.

The first record would be like woozy or contented or nocturnal. Whilst with this one, we knew for sure that we wanted to have longer teeth. It’s almost a much more personal record. The first record was kind of about the outside world and how we saw it, while this one is more about the inside world. 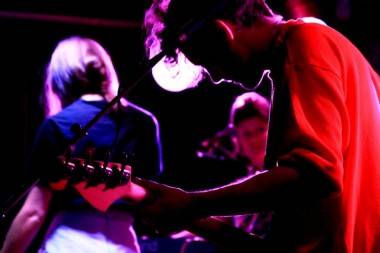 RN: You guys met at the University of Colorado back in 2005. Was filming the video for “Met Before” sort of like a blast from the past?

PW: I never thought of that. We actually didn’t really go to school together. I never really saw you [addresses Caroline] on campus. [laughs]

CP: We only hung out outside of school. Patrick was two years ahead of me.

RN: What were you guys studying?

PW:Â I was studying jazz.

CP: I was studying art.

RN: So nothing to do with the science theme of the video?

CP:Â No, that’s more about our mutual interest in science. It’s not even something we talk about very often, but we laugh all the time like that’s what we’re supposed to be doing. Or that’s how we even interact with each other, as kind of more like lab partners. We’re not a couple, we’re not best bros, we’re lab partners.

RN:Â And I also read that you started out wanting to make music for haunted houses. So I was wondering if you’re drawn to the horror genre and if you had to do a soundtrack for a scary film, which one would it be?

CP:Â I can only think of ones with good soundtracks! Which isn’t very useful is it?

PW:Â Halloween is a good one. I’ve never been into scary movies though. Because they’re scary. [laughs]

CP:Â I would really enjoy remaking the Carrie soundtrack. You get to have dance scenes, shower scenes, witchy mother scenes. That’s something that we really like. Patrick and I are both Geminis and are both pretty ADD and love trying on different things for size, so I think that format of soundtracking a movie would come really naturally to us.

RN: And that’s what I found listening to your latest record. You build a sort of environment. So do you find that there is a narrative progression to the album?

CP:Â Yeah. We didn’t think about that when we were writing the songs, but the songs all kind of came out of real emotional places in our lives over the past couple of years so they all sat well together. And then when we were sequencing it, we thought a lot about the narrative not just in terms of the lyrics, but in the kind of emotions that a song leaves you with.

For me, the weirdest transition in the record is still from “Cool As a Fire” to “Amanaemonesia”. But even if that’s a big jump, we both really love the old school format of an A side and B side on records, so we want “Cool As a Fire” to be understood as the rolling of the credits and the bass line of “Amanaemonesia” is like boom, you’re into side B. But when you listen to it on your iPhone, it can be an emotional jump, and I’m interested in how people make that part of the story.

RN:Â And we’re all used to listening to playlists or the shuffle functions on our phones these days. Do you think people have lost the ritual of listening to an LP in it’s entirety? Do you think the message of the record as a whole is lost when you get attached to just one song?

CP:Â I’m one of those people so I can’t… I think that people who listen to full-length records in sequence are people who put them on as background music. I have a bunch of photographer friends and they say our record is really good to shoot to. It’s almost sad that the people who listen to full records are more passive listeners, not active listeners? But I think it’s fine. Patrick and I are both guilty of being playlisters.

RN:Â So what songs are at the top of your playlists right now?

PW:Â This morning I listened to “Ladies and Gentlemen We Are Floating In Space” [Spiritualized] about 17 times.

CP:Â I’m not really a fan or connoisseur of house music, but this one song has had me by the balls for the last few days. It’s called “Who Do You Love?” by Museum de Bellas Artes. I don’t even know where they’re from, I’m gonna guess they’re Spanish or Italian? Or maybe they’re American and just being facetious. The song has been owning me.

RN:Â That’ll wrap things up for us. Great job on the latest album, and we can’t wait to hear more from you two in the future. Good luck with tonight’s show and the rest of the tour!