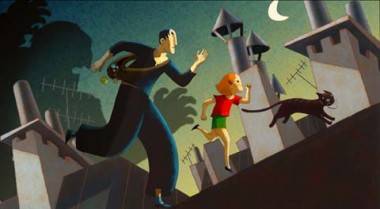 The Oscar-nominated A Cat in Paris.

Is A Cat in Paris the best movie of the year?

Could the prospect of this year’s Academy Awards be even more boring?

There’s nothing to love and a lot to just kind-of sort-of like in this year’s Oscars, from the choice of host to the movies vying for Best Picture. Last year’s presenters Anne Hathaway and James Franco scared the producers so much that the money-men turned to Billy Crystal, no one’s first choice for anything except maybe… no, I can’t think of anything Crystal would be the first choice for.

Voters meanwhile selected movies just as safe: Warhorse (Spielberg), Hugo (3D family fun!), and The Help (civil rights). The other six range from the slight (Midnight in Paris) to the weighty (Tree of Life) to the perverse (Extremely Loud & Incredibly Close, which no one seems to have liked but hey, it’s gotÂ Tom Hanks and it’s ostensibly about 9/11). Of the remaining three – which include The Descendants and Moneyball – only The Artist is something of a surprise.

In fact, so uninspiring are the nominees in this year’s categories that we’ve decided to focus on the only movie that looks remotely interesting: A Cat in Paris.

Like Hugo and Midnight in Paris, A Cat in Paris is set in Paris. Unlike those two American movies, A Cat in Paris is actually French (complete with French-speaking voice actors and characters with pointy little mustaches) and is nominated in the Best Animated Feature category. Every cell has been hand-painted, like in the olden, pre-computer days, which gives the film a classic traditional animation look. Dino is the cat; little Zoe is his owner; and Nico is the cat burglar with whom Dino leads a night-time life of roof-top jumping and theft. It looks a delightful little romp, at least from the trailer; we tried to track it down but it’s only available in the Australian iTunes store!

And it’s only 65 minutes. Compare that to Rango, also up for Best Animated Feature. The Gore Verbinski-directed computer-animated yawnfest drags interminably on for its 105-minute running length when, actually, a trailer of Johnny Depp as a chameleon would have been just fine, thanks.

The other nominees in the Best Animated Feature include the cash-grabsÂ Puss in Boots (spun off from the egregious Shrek franchise) andÂ Kung Fu Panda 2 (because Jack Black needs work). The Spanish-language Chico and Rita is the only other nominee in this category that looks remotely interesting, at least to me; but I’ll admit I’m probably being needlessly cynical.Â At least Gnomeo and Juliet wasn’t nominated.