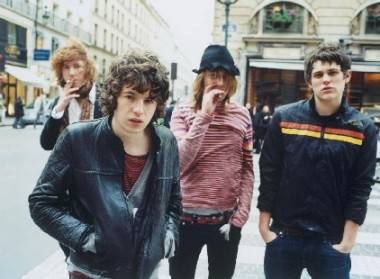 The Kooks at the Commodore Ballroom, Vancouver, Dec 4 2011

It’s hard to believe that a decade has gone by since the hip, ultra-attractive lads of The Kooks started traipsing around the world with their contagious Brit-pop tunes. Frontman Luke Pritchard and company have gone quite the distance, from their humble beginnings in their hometown of Brighton, East Sussex, to now selling platinum-status records in the UK and abroad.

The Kooks’ latest release, Junk of the Heart, continues to make an indomitable impression on their fanbase of twenty-somethings, as evidenced by their sold-out Sunday night show at Vancouver’s Commodore Ballroom. The blushing ladies in the audience went googly-eyed for Pritchard’s slurring accent, sexy squeals and the rest of the band’s easy breezy manner. Their optimistic and contagious hooks, tight harmonies, and even tighter jeans make them one alluring and oh-so adorable quartet.

As their leader, Pritchard shines. He’s a rare bird, constantly singling out and flirting with his admirers in the crowd, all the while preening and strutting his stuff on the raised platform at the front of the stage. This band knows their audience and has no qualms about giving them the high-spirited pop tunes they crave, and the band members enjoy every minute of basking in the rays of admiration.

A very special mention must go to openers Yawn from Chicago. The electro-indie outfit blew the crowded room away with their modern take on ’60s pop-rock delivered with a just-rolled-out-of-bed ease. Your best of 2011 list will not be complete without their first full-length record Open Season.