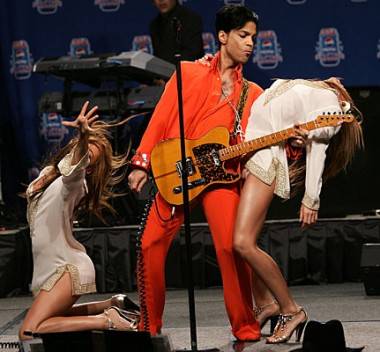 Prince began the seventh night of his 2011 Welcome2Canada Tour with a sampler set, including “When Doves Cry”, “Sign O’ the Times”, but really what that 25 minutes and the next 25 minutes are about is Prince as DJ, as teller of a musical story that began with James Brown and Sly and The Family Stone. He jokingly called the opening of snippets of his hits “sound check”. Throughout the show, Prince told the audience to call the babysitter because he parties all night. Two and half hours later, Prince is bang/funky/on that message call.

Dirty Mind, Controversy, 1999 and Purple Rain, those were my Prince albums. With Dirty Mind, I backtracked to For You and Prince (the roots of the journey, the evolution of a revolutionary artist). On December 27th, 1984, I was 21 years old and I saw one of his Home Xmas shows, The Purple Rain Tour. Then and now.

He and his band, The Revolution, bore a tremendous chip on their shoulders and in their passionate hearts. Michael Jackson. Prince and his group of hungry, slighted musicians were nonstop funky, unrelentingly sweaty, massively awe/some. All of the great songs from the aforementioned four albums were played. Played, that word is so inadequate. No words can describe Prince and his band from that period. Only Bruce Springsteen and his E Streeters could touch Prince and His Revolution. They messed us all up by taking us to the heavens.

On December 8th, 2011 at the MTS Centre, Prince and The New Power Generation played every song true and funky hard, with passion and with the assured knowledge that no other funk band in the world can touch them (or) these song/gift/jewel/hits they gave us. “Winnipeg!” “Canada!” Prince even pays tribute to MJ with “Don’t Stop ‘Til You Get Enough” on this tour. This is a different Prince from 1984. At peace. A different tempo Prince. 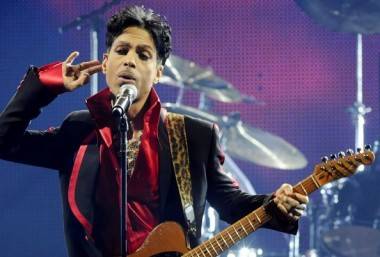 Every night on this tour, you will hear and dance to and sing “Delirious”, “Let’s Go Crazy”, “Little Red Corvette”, “Raspberry Beret”, “Cream”, “Controversy”, “Kiss”, “1999”, “Baby I’m a Star” and so many other Prince hits. Every night on this tour, you know you will hear the enormous hit “Purple Rain”, with its searingly/electrifying Prince guitar solo. You will see and touch the purple rain streaming, in the form of purple ticker/tape fall/flittering everywhere, a purple flag waving and purple rain banners unfurled from the rafters.

Every Prince hit song, I beamed/I soared as the intros began, knowing full well what gem was coming. I danced. I sang some (apologizing to my seat neighbor for my terrible singing voice) and we The People danced and many sang.

However, it’s in the surprises, the gifts he gives his audiences on any given night that you really need to stand back and consider the generosity of his musical spirit and knowledge. In Winnipeg, we were honored with three Sly covers. We were honored by Prince reminding us, we the people, to “stand up for something, or fall for anything.” He followed up with a cover of Sly’s “Stand”, Prince’s comments aimed tellingly at what is happening in his home country and around the world. Revolutionary Prince warning us to stand on guard for our funky/compassionate Canada.

No one will forget Prince’s spotlight dance. His guitar solos. His soul/funky/voice belting out in raspy (when the song calls for such texture) passionate/power. His falsetto highs. The grace with which he dance/strolls around his Love Symbol stage. Or his finely tailored suits! He is undeniably unforgettable as a performer. Have I mentioned he is one of the greatest guitarists ever? Jimi Hendrix great. Gorge your hungry funk/souls on those Prince deliriously, delicious guitar solos.

I need to mention the wonderful use of multiple large screens, high above the stage, resulting in no seat being a bad seat. There are close/ups on solos/fingering styles of Maceo, Larry and Prince. Constant flow of great shots of Prince’s reactions and his dancing, too.

The things that don’t work on this tour. The image policing policy, no pics, no YouTube vids. The arena wasn’t sold out. More images, live and still, and words about Prince and his band need to be democratically/freely distributed. The Winnipeg show was also marred by tight security around the stage. The one time the floor audience rushed the stage to dance for Prince as he sang to them, I noted, “the concert lifts to a higher plane now.” Well, when I returned to the 100 dancers, they had been cleared by security! Ridiculous. Artists/musicians feed off the passionate energy of dancers. It is a building, volcanic energy that feeds both ways.

The Prince of 1984 was unrelenting. Prince today is tempo and grace, waves and knowledge. For me, the beginning and the end of this show lacked the pure/lifting/energy of that nearly so untouchable 1980s Prince.

Yet I loved Prince’s Revolutionary music/passion/band then and I love this Prince and His New Power Generation now. Get up/stand up People and dance, the Now of funk music is in the house and if you’re not dancing and singing, you’re not living.

When Doves Cry
[Sampler Set]
Sign O the Times
The Most Beautiful Girl in the World
Forever In My Life
Darling Nikki
Hot Thing
I Would Die 4 U
Housequake
A Love Bizarre (Sheila E. cover)
Joy in Repetition
Everyday People (Sly & The Family Stone cover)
Alphabet Street
Stand
Life
Thank You (Falettinme Be Mice Elf Agin) (Sly &a The Family Stone cover)
Take Me With U
Raspberry Beret
Cream
Cool / Don’t Stop ‘Til You Get Enough
Yesterday (The Beatles cover)
Nothing Compares 2 U
Purple Rain

One response to “Prince in Winnipeg”