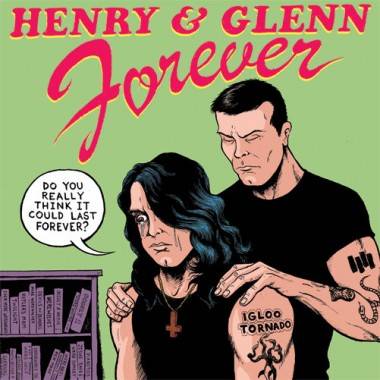 – Have you ever wondered what your favorite macho male punk icons would look like if they lived together and gave each other back-rubs? Wonder no more: read Henry and Glenn Forever.

Glenn Danzig, aka The Dark Lord or Evil Elvis, has a deep magical voice that navigates each of his punk/metal songs into a creepy swamp of Satan where he keeps a giant store of cat bones and extra freaky black clothing. Danzig is a short, muscle-bound demon, measuring in at 5’6. He was the main force behind Horror Punk with his legendary band The Misfits starting in the late ’70s.

Henry Rollins has a destructive intensity and turns into a hip, anger-filled monster at the slightest provocation.Â  Rollins made a name for himself in the ’80s hardcore band Black Flag through the wave of emotions and force he let loose while performing. Rollins is outspoken politically and started performing spoken word acts around the end of Black Flag. A muscular body-builder, he has had all forms of macho hair from heavy metal and long to militaristic and buzzed.

Both rockers are overflowing with machismo and testosterone, creating a perfect opportunity to move them in together, show them caring deeply for each other, and have them living next to Hall and Oates. Right?

The two-year-old comic Henry and Glenn Forever is a fictional look at Rollins and Danzig being roommates and domestic partners. They are a couple that live next door to a fictional devil-worshiping Daryl Hall and John Oates. Henry and Glenn are depicted in hilarious moments that range from Danzig asking the docile Henry to judge how his butt looks in tight pants to side-by-side statement-and-agreement motifs where the couple makes oblivious fun of themselves by making lame cultural statements (agreeing that “I hate corporate sponsors” while wearing Nike shirts). The comic seems to be jabbing from every angle at the macho identities that these two made legendary within the punk/metal world. 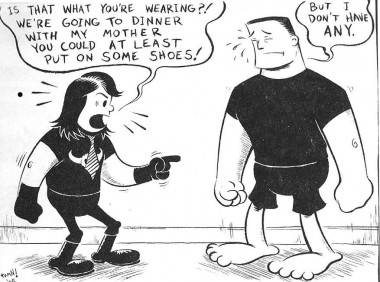 Tom Neely, Gin Stevens, Levon Jihanian, and Scot Nobles comprise Igloo Tornado, the L.A.-based artist collective responsible for the comic, from Portland’s Microcosm Publishing. Created on a drunken night, the comic has taken off, inspiring a gallery art show in Los Angeles and a small volume of collected strips. The comic has been shown to both Rollins and Danzig, with Rollins responding: “Has Glenn seen this? Trust me, he would not be amused”, and Danzig saying enough so that Neely could make a hilarious page-long comic about it.

This month, the Henry and Glenn Facebook page announced that Ed Luce and Benjamin Marra will contribute stories to a new issue that will come out soon. Check back with us for more. – EB

– Beer and comics – there’s nothing wrong with that combination. Nor are we talking some pansy Wolverine title and PBR; nope, mighty alt-comics publisher Fantagraphics has teamed up with craft brewers Elysian Brewing Company in a match that could only be made in Seattle (home to both). EBC will release what they’re calling “12 Beers of the Apocalypse”, one on the 21st of each month of next year, and each featuring label art by Charles Burns based on his weird ‘n’ creepy Fantagraphics comic Black Hole. Each beer will be made from specialty recipes – the first, the Nibiru, is a Belgian-style Tripel made with an infusion of yerba matÃ© – never to be brewed again. From the news release: “These limited brews will be available in bottles and draft and at select bars and bottle shops. We will celebrate as they are releasedâ€‰–â€‰on the 21st of every month in 2012â€‰–â€‰with events at one or the other of Elysian’s three Seattle pubs and at Fantagraphics headquarters in the Georgetown neighborhood.” – SC 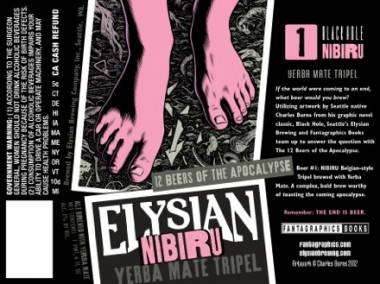 – Camilla d’Errico recently showed off a stunning commission featuring three amazon warrior-types with a penchant for tiger claws. According to her Facebook post, it will be used as a cover for a graphic novel written by Vancouver stuntwoman Maja Stace-Smith (Fringe, Smallville). The Snipe hopes to have more details as they surface. – RI 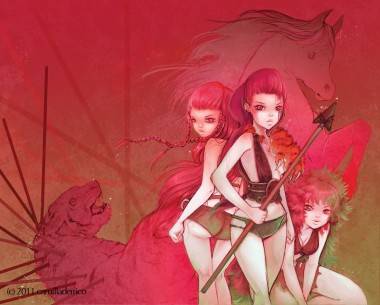 – At Length Magazine asked five cartoonists to give their favorite books the Classics Illustrated treatment. There’s a hilarious take on the subject of adaption by Kevin Cannon, a poignant comic from Melissa Mendes, and the dead-on adaption of Chuck Klosterman’s Sex, Drugs and Cocoa Puffs by Noah Van Sciver that we’ve all been waiting for. [At Length Classics Illustrated link] – RI

– If the new Muppets movie left you riding a wave of nostalgia for more Jim Henson-y goodness, you’re in luck: a double-dose of the late puppeteer’s work is hitting comic shops today from Archaia Entertainment.

Jim’s Henson’s Tale of Sand is a graphic novel based on a “lost” screenplay from the ’70s, co-written with Henson’s frequent writing partner Jerry Juhl. The story follows a loner being chased across the desert, featuring a heavy dose of the surreal. Ramon K. Perez’s kinetic, eye-popping art looks amazing in this preview. There’s also Jim Henson’s The Storyteller, that brings back the ’80s live-action/puppet show. The show, which featured an old man retelling myths and stories to his talking dog, will be reincarnated as a hardcover anthology with different writers and artists taking on each short story. The first volume features a story adapted from one of The Storyteller’s original writers (and English Patient director) Anthony Minghella. – RI 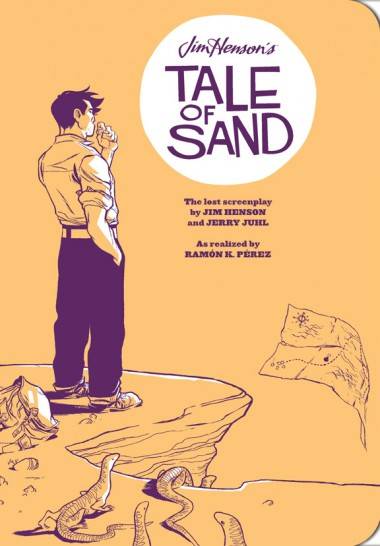 A Tale of Sand cover art.

– The Escapologist is a comic by Simon Moreton, whose tumblr claims that he is a “… boy in a man costume…” The Forbidden Planet blog reviews Moreton’s new comic The Escapologist #2, the second in the series of abstract comics that involve random panels depicting buildings, grass, bricks, environments, and sometimes random shapes and action symbols. Rarely, or rather sparely, is the reader given any text to place the drawings in any helpful context, but the reviewer seems to be fully taken by Moreton’s random devices. The drawings themselves are captivating and compelling, and seemingly there to tease the reader into finding the objects and places in the world at large. – EB 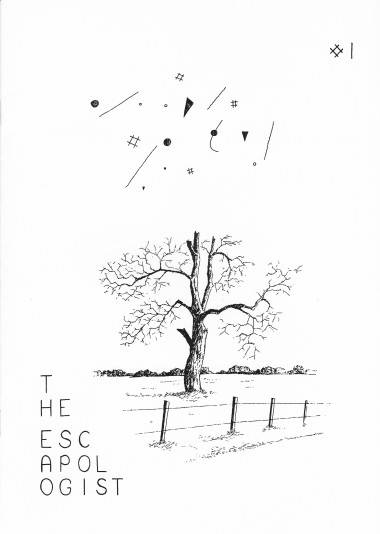 The Escapologist art by Simon Moreton.