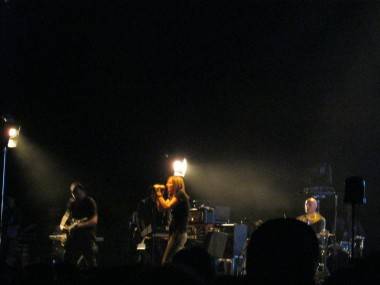 Working at a music venue has its pros and cons. The pros being that you’re exposed to tons of new music and you get to see your favorite bands perform live. The cons being that once you’ve seen enough bands live, you stop giving them credit for effort and begin to expect something a bit more distinct – an essence – like the one Portishead filled Seattle’s WaMu Theatre with last night.

Portishead has become synonymous with elusiveness: after releasing two major hit albums and earning cult status, the band took 10 years to release their appropriately titled album Third. There were rumours that singer Beth Gibbons’ bandmates expected her to reach sobriety before recording an album, and that the band’s 13-year hiatus from touring North America was due to her fear of flying. Regardless, the band announced its 2011 North American tour earlier this year, and completely shook everyone that filled the WaMu on Oct 23. 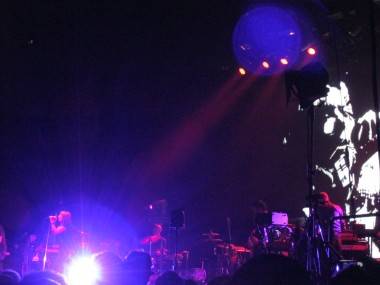 Gibbons stood with the poise of a porcelain goddess, cupping the microphone with subtle rocking movements and a voice that carried and crept through the stadium into everyone’s skin. The set began with three songs off Third, the most memorable being “The Rip”, which included the same backdrop visuals as the ones in the music video. The visuals that accompanied the show were hazy and dream-like, and created the perfect ambience for Portishead’s performance. When the familiar drone of “Sour Times” filled the room, the crowd roared: Gibbons seemed pleased with the reaction and stood up facing her bandmates with a cheerier disposition.

When the heavy bass lines of “Wandering Star” crept in, Gibbons moved from her resident spot in the front of the stage to a bar stool, where she sat facing Geoff Barrows. As she sang with her head tilted down and her hair covering her face, the stadium became entirely still and silent, everyone focused intently on Gibbons. With minimal gestures and movements, she managed to command and captivate the crowd in an otherwordly way. Everyone was possessed – the crowd watched her every move, and Gibbons’ reactions determined how the audience reacted. With the exception of a few extended passages where Gibbons would improvise, the band’s sound varied little from their studio albums. 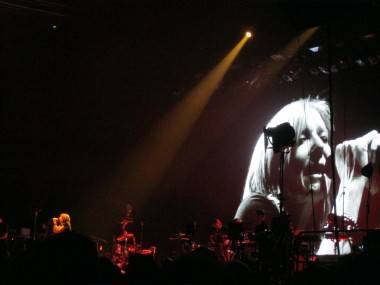 The real magic of the show happened when the band played “Roads” for their encore. Images of fireworks lit up on the projector and Gibbons filled the stadium with her incredible voice, which sounds even better live. Distorted images of Gibbons lit up the screen towards the end of the song, where it looked as though the singer turned away in tears as she sang the final, “How can it feel this wrong?”

Watching Portishead live made one thing clear: the band has an ability to evoke emotions from their audience in a way that is incomparable. With Portishead, the grandiose gestures and party tricks are unnecessary, Gibbons’ ability to transcend when she comes in contact with the microphone becomes a release for everyone watching, and that is more than enough.