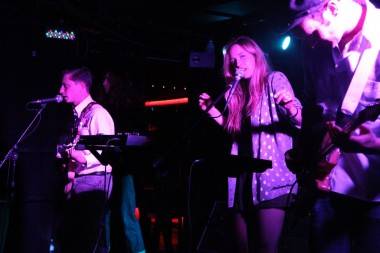 Only a few dozen made it out to the Biltmore’s early Saturday night show, a factor that was most likely due at least partly to the plethora of Halloween-related events going on in Vancouver. People who did make it out to the show though got to enjoy an almost-private performance by two excellent up-and-coming bands, Dominant Legs and Nurses.

Dominant Legs’ co-lead vocalists Hannah Hunt (keyboards) and Ryan Lynch (guitar) got into the spirit of things by donning wigs, hats and bunny ears proferred up by a few people in the hardcore bunch of audience members near the stage. These few danced enthusiastically to the Bay Area band’s supremely hooky, ’80s-inspired guitar-and-synth, blue-eyed-soul-sprinkled pop. The band is touring in support of its debut full-length, Invitation, which includes the song/video “Hoop of Love”.

Portland trio Nurses opened with a set of indie-pop that was just as danceable as that of Dominant Legs’ but which incorporated some backing rhythm tracks and intricate guitar lines that, just a little, recalled Vampire Weekend.