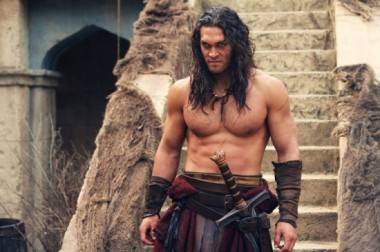 The 10 most entertaining Conan ripoffs

With the new Red Sonja and Conan remakes soon to hit theatres, we here at The Snipe aim to prepare modern society for the massive groundswell of barbarian-mania that will invariably sweep across the nation. What with Marcus Nispel’s new Conan movie primed to hit theatres on Aug 19, people from all walks of life, class, and age range are sure to don chainmail, take battle-axe in hand, wildly swing it, shatter bones, and scream to their newly appointed god Crom.

It sure wouldn’t be the first time.

Back in 1982 a fantasy blockbuster film created a somewhat similar reaction in the general public. It was directed by manly-man director John Milius, and introduced North America to an over-the-top personality, Arnold Schwarzenegger – who would of course go on to become the biggest movie star in the world. 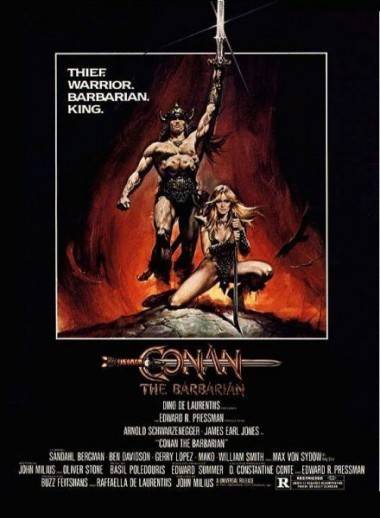 Making five times what it cost, Conan would herald a stinking horde of muscled imitators, rising from the film industries of many countries. Here is a list of what we’ve named the “10 most entertaining” examples of this genre, but don’t get worked up if your fave is missing, because truth be told, it could also work as a ten worst list. What really makes this genre so much knee-slappin’ fun is that with the exception of the exceptional Conan from 1982, a great barbarian movie is almost indistinguishable from a terrible one. It is quite unique in that respect.

Sword and the Sorcerer (1982 USA) – Conan had his riddle of steel, but that muscle-bound muther only had ONE blade! So surely a sword that has three blades must be three times better, right?! Well, we’ll leave that up to you, but with great sets, topless babes, rad special FX, and Talon the sword master, Albert Pyun’s Sword and The Sorcerer is certainly worth a watch – especially with some booze and some like-minded pals. I know a few drooling fans who contend that this is the greatest Conan-style swordplay film ever made.

Trailer – The Sword and the Sorcerer:

Hundra (1983 USA/Spain) – Hundra rocks buttocks! If you’re looking for a female version of Conan, Red Sonja is a nice start. But a lesser known yet superior choice would be this entertaining Matt Cimber picture from 1983. Born in a tribe of fierce warrior women, Hundra despises all men, and reigns brutally supreme over every single one she meets. American-made, but shot in Spain, Cimber cast formidable Torontonian Laurene Landon as his titular heroine, who can also be seen playing a courageous police woman in Maniac Cop.

The Seven Magnificent Gladiators (1983 Italy) – You can guess that you’re in for a treat when the screenwriting credit pops up and Claudio Fragasso’s name appears. This Italian schlock-king sports some of the most idiotic ’80s genre scripts around: Hell Of The Living Dead, Strike Commando, Troll II, and SS Experiment Camp, to name just a few. Here he has a nearly naked Lou “Hulk” Ferrigno run around with a sword, which should keep you gay fellows happy. Don’t fret, my lesbian sisters, there are some lovely greased-up cleavage-heavers that wrestle one another for your entertainment as well. 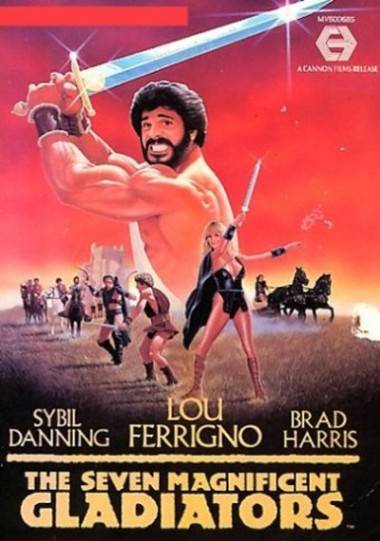 Deathstalker (1983. Argentina) – “If he can capture the amulet of life, he will rule the world. But an evil wizard stands in his path. And to the victor, a beautiful princess!” That bit of promo there tells you pretty much all you need to know about DeathStalker, a ridiculous Conan rip-off from Argentina. The movie is notable as containing one of the memorable bare-breasted female warrior performances by Lana Clarkson, who was later shot in the head and killed in 2003 by 1960s girl-group producer, Phil Spector. (Also see: The Barbarian Queen movies)

The Barbarian Brothers (1987 Italy/USA) – Directed by Ruggero “Cannibal Holocaust” Deodato, and written by James Silke (Silke is, among other things, the author of the Frank Frazetta’s Death Dealer paperback novels), this movie stars twin himbo bodybuilders named Peter and David Paul. What I love about this movie is that these oily, waxed oafs come across every bit as moronic as sword-swingin’ barbarians would in real life – which is oddly missing from most of the films in this genre. Actually, nothing I can say about the brothers and their movie can come close to summing up what is effortlessly conveyed in this short werewolf battle scene:

Gor (1987 USA) – Ok, this one kinda sucks but I had to yap about it anyway. Gor is based on a bunch of shitty sci-fi novels which have been co-opted into the rapey fetish subculture of Gorians. In the movie, a nerdy scientist is transported to another planet which is on the other side of the sun and remains continually hidden from us here on Earth. While there, he goes buckwild and get his battle on with barbarian warlords who keep all women as submissive pets. They’re lower than dogs, and treated thusly. This movie is an ass-lovers dream. I’ve watched piles of these fantasy-sci-fi dingleberries, and even in the ones where there is some scantily-clad barbarian woman warrior in the chain mail bra, there is always some kind of loincloth-type thing that covers up her hinder. Not so here. 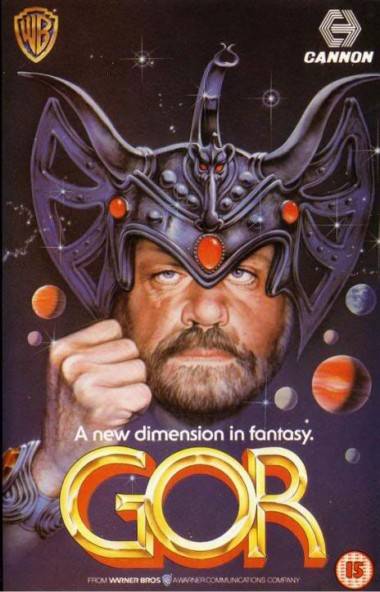 Masters of the Universe (1987 USA) – Despite being corny as hell, this musclebound swordplay lunk-head epic is miles more entertaining than the popular TV cartoon show it was made to cash in on. Director Gary Goddard wanted Matthew Modine for the role of He-Man, but producers Golan and Globus wanted Dolph Lundgen, who stinks this up every time he opens his dopey mouth. Stick around after the credits though, because Skeletor’s head pops out and says “I’ll be back!”, setting a stage for a sequel that (along with Cannon’s plans for a Spider-Man movie) was shit-canned when Golan and Globus couldn’t scrape enough money together to pay Mattel and Marvel for the rights.

Trailer – Masters of the Universe:

Hercules (1983 Italy) – This movie stars Lou Ferrigno and Sybil Danning’s tits. Highlights: Hercules throws a fucking bear into outer space. You want more? Frankly, that should be all you need to get excited about this, but he also has grown man hands when he is an infant, walks across a rainbow bridge, fights with giant stop-motion robots, wins a woman as a prize for cleaning up poop faster than any living man ever has, and meets the king of Africa who rides around with his honkey bitches inside an elephant skeleton. My wife Rebecca and I watched this whole thing with our pieholes agape. Amazing.

Hercules 2 (1985 Italy) -Â Because one was not enough! Where else does the hero of the movie grow so big that he can step between the earth and the moon when they start getting uppity with each other? What other movie gives you sound and laser visual FX that are Atari 2600 quality? None have the balls to. They wouldn’t dare. Well this movie does, and it all culminates in a cheesefest laser light show in the sky as colourful outlines of the characters are animated onto an outer space backdrop. They do battle as gorillas, dinosaurs, snakes, and what the hell is going on in this fucking movie? Astonishment, that’s what.

Yor, Hunter From The Future (1983 Italy) – We simply can’t finish this list without some Reb Brown, no way, no how. Hey, remember in Inglorious Basterds where Quentin Tarantino had one of his characters named “Margheriti”? Well, he was paying homage to YOR director, Antonio Margheriti – and one peep at his dinosaur-fighting hero (played by the aforementioned Reb Brown) will have you understanding why. Haha, I remember quite vividly being 11 years old, and dragging my poor grandmother to this movie when she made the mistake of taking me to a matinee and letting me choose what the two of us would see. As the end credits rolled, we stepped out into the warm afternoon sun of Granville Street -me charged up and thrilled about the futuristic barbarian insanity I’d witnessed, and my poor grandmother utterly shellshocked.

6 responses to “10 most entertaining Conan ripoffs”