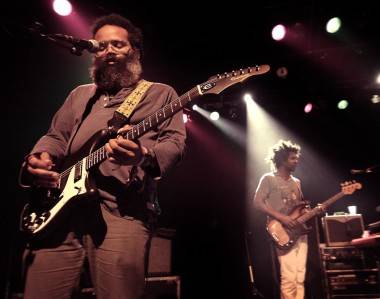 Eclectic indie rockers TV on the Radio were the toast of Vancouver this week as they played two back-to-back performances at the Commodore Ballroom. Those Â lucky enough to attend the first show witnessed the uncontainable energy they brought to the venue, and which compelled hundreds of sweaty and gleaming fans to dance frantically to their funky, psychedelic tracks.

Unfortunately, their openers Grave Babies did not receive the same warm reception. The Seattle band’s spooky aura and garage punk sound, created through their dark chord structure and sinister lyrics,Â felt like a cross between the Misfits and the Vaccines, minus the contagious pop hooks. But their abstract music proved to be too frustrating for some members in the crowd, which became evident when one drunken heckler started screaming “You suck! Go home! Go away!”. 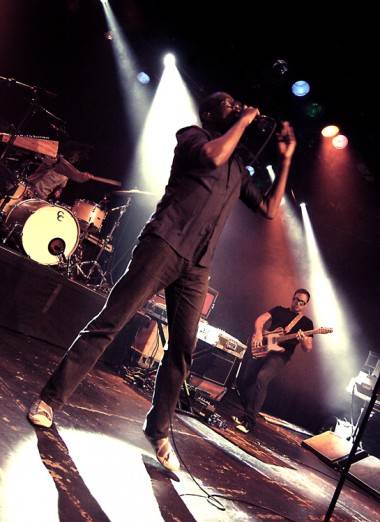 The high-voltage performers calmed down momentarily on “Will Do”. Adebimpe’s reggae phrasing and intonation mirrored bassist Jaleel Bunton‘s dub bass line. The chill-out vibe continued with “New Cannonball Blues”. Malone then unexpectedly whipped out some blueberries and offered up the anti-oxidant treats to the dehydrated folks in the front row. He literally had them eating out of the palm of his hands. Sensing a bond with the audience, he admitted, “I don’t like to play favourites, but I don’t know how tomorrow’s crowd is gonna beat you”. Fans proved their loyalty further singing along to every note and raising their fists in the air toÂ  the rock ballad “Young Liars”.