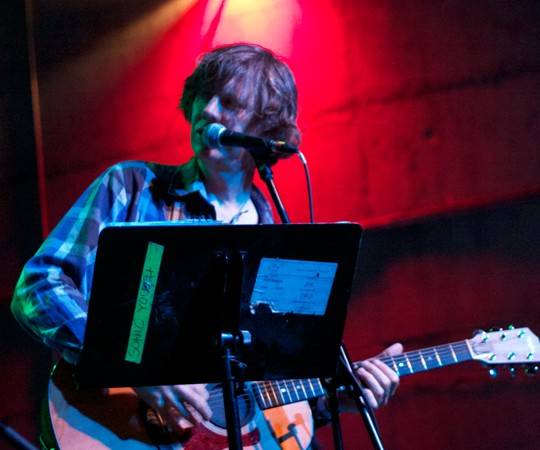 Review and photos–Thurston Moore at the Rickshaw Theatre, Vancouver, July 21 2011

As a fairly obsessed Sonic Youth fan since ’95s “Washing Machine”, I was expecting to experience pangs of nostalgia while watching my favourite plaid-shirted noise-maker grace the stage of the Rickshaw. But what I didn’t expect was just how much Kurt Vile & The Violators (who were completely new to me) kicked in those ’90s flashbacks. The hair-shrouded faces and distorted guitars were part of it, but there was something else.

The show transported the audience back to a time when nights were spent listening to sensitive art-school acidheads sit around a bonfire and strum their guitars louder than they could sing. Some audience members expressed complaints about this very issue as it was impossible to understand what Vile was singing/mumbling. 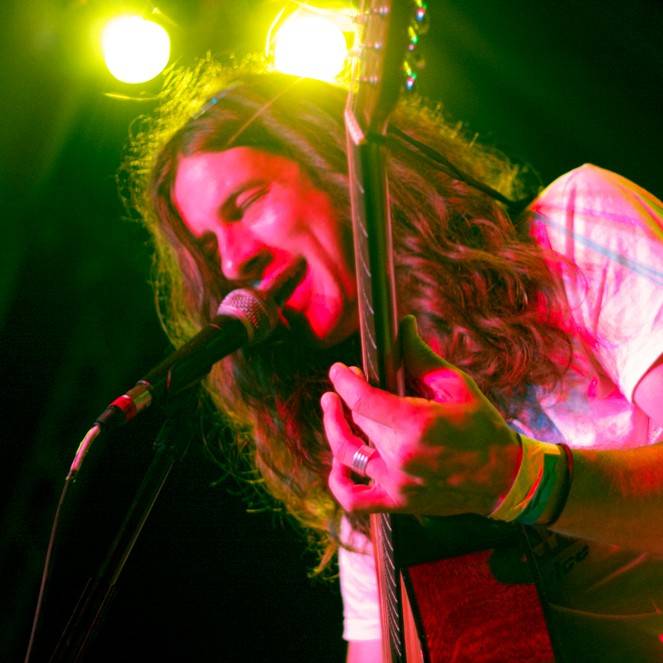 The acoustics of the concrete box that is the Rickshaw were partly to blame, but it also seemed that Vile wanted it that way. His voice was drenched in echo, and the three guitars (none of them a bass) all did their best to build up a wall of noise. A heap of distortion is encouraged, but I couldn’t help but feel as though there were some great lyrics buried under there, and some charming melodies wanting to come though.

Headliner Thurston Moore came on with his effortless New York cool and a friendly stage presence. He and his band had just been driving for three days to get to the “welcoming committee from a harsh reality” that greeted them in the alley behind the Rickshaw. Not to imply any negativity, he dedicated his first song, “Mina Loy”, to a “beautiful lady in a wheelchair” he met outside there.

Their set focused primarily on new material from the Beck-produced Demolished Thoughts and a few from the much overlooked Trees Outside the Academy. Moore has developed a very distinct style and sound over his 30 years of being an art-rock pioneer through Sonic Youth and his countless side-projects. Hearing spacey Sonic Youth-type chords come through on an acoustic guitar was refreshingly intimate, and something explored a lot more on Moore’s solo work. Songs often started with long instrumentals that laid out the elements before Moore’s assured vocals floated in.

Adding to the intimacy was the accompaniment of a violin (played through some strange compression effect by Samara Lubelski) and a harp (Mary Lattimore). The instruments added sweet punctuation and magical flourishes to the overall performance. This was indeed felt by one crowd member who screamed “more harp!”  Helping out on guitar was Keith Wood (Hush Arbors) who held things together pretty well, though his opening set was lackluster.

As for the audience, well, there was too much chatter (fans, like myself, recalling their old Sonic Youth-related memories perhaps) and way too much whistling during songs. At one point Moore chuckled, “You guys are a bunch of whistling motherfuckers.”

After a small break that sapped the show of some momentum, Moore brought us back with the spellbinding “Benediction”, his closest attempt to a love song. The more uptempo “Friends” and “Circulation” showed that the age-defying singer can still bring out his inner young punk.

Going further in that direction, the set closed with the title track from his 1995 solo album Psychic Hearts, a driving two-chord song with charming angsty-teenage lyrics like “The kids at school called you slut/nothing but, what the fuck/are they into, the stupid fools”.  Watching Moore glance at his lyric sheet to remember the words was a touch disappointing – but forgivable. Considering that, at 53, he remains one of the most innovative and talented musicians in rock music, it’s also somewhat reassuring that he’s not entirely outside the effects of aging.

One response to “Thurston Moore at the Rickshaw Theatre”