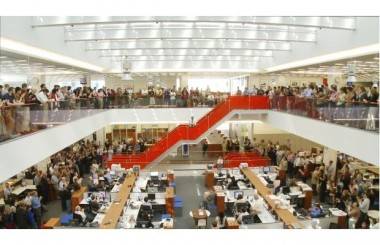 A scene from Page One: A year inside the New York Times

Movie Review – Page One: A Year Inside the New York Times

There couldn’t have been a better time or place to attend a screening of director Andrew Rossi’s both thoughtful and entertaining documentary Page One: A Year Inside the New York Times.

The screening took place amidst the just-breaking scandal of the shameful hack-job of a takedown that will be the legacy of the 168-year-old British paper the News of the World and within one of Vancouver’s few surviving independent cinemas (the Fifth Avenue). And it was hosted by Graham Peat, co-founder of the soon-to-be-gone but never-forgotten iconic video store Videomatica. The turbulent effect of the wired tsunami that has been threatening the erosion of many landscapes within traditional media planes could not have been better felt than on that particular day in that particular theatre.

The documentary is more than just a wistful or nostalgic love letter to one of the world’s most venerated news institutions, the so-called “Grey Lady.” It is an exploration of her relevance and role in a sea of constantly changing and frequently polluted, murky news cycles. The backdrop of the story ostensibly presents the broad scope of the paper’s history and influence, contrasting its past highs (the Pentagon Papers) and more recent lows (Judith Miller and the impact of her incorrect reporting of Iraq’s weapons of mass destruction) against its own current financial crisis: with fewer and fewer people paying for actual “news”, in a culture where people are eschewing traditional paid media for non-traditional aggregate entities like the Huffington Posts and Gawkers of the world, how can the Grey Lady manage to stay afloat? And more importantly – why do we need her to? 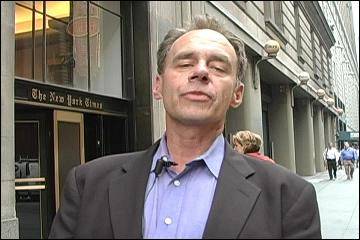 Along the way the audience is treated to a cast of worker-bees whose passion for their mistress seems fueled by both principled ethics and an extraordinary commitment to Coca-Cola. One of the most memorable of these dedicated employees has got to be media and culture columnist David Carr.

The raspy-voiced ex-cocaine addict is as adept at writing as he is at lobbing a smoulderingly articulated verbal grenade (which he does, several times, in some of the more hilarious moments of the film) at anyone who dares to raise his ire. Contrasted with digital wunderkind and blogger-turned-Times journalist Brian Stelter, Carr represents the old-school “analog” journalist. The push-and-pull between these two (Carr begrudgingly joins Twitter at Stelter’s behest; currently @Carr2n boasts 330,000 followers to @BrianStelter’s 67,000)Â  beautifully illustrates many of the fissures and chasms within the current climate of modern-day journalism. Carr succinctly modernizes the great Marshall McLuhan for a digital audience by paraphrasing, “The media is not the message; the messages are the media.”

Page One is required viewing for anyone who wants to know how their news gets culled from its place of origin and distilled as a story in whichever medium they choose to digest it. While some of us may feel more than entitled to download the latest Michael Bay pyro-fest with zero hesitation, the effect of a modern society whose behaviour impacts judicious journalistic institutions is not without consequence. Like real news, some things – like music made by independent artists and movies rented from neighbourhood video stores or watched at your local cinema – are worth paying for.

Watch – Page One: A Year Inside The New York Times (trailer):