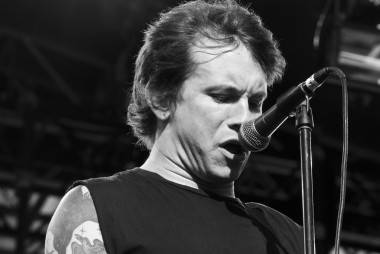 Tom Gabel with Against Me! ast Sasquatch, May 27 2011. Jade Dempsey photo

Snipe photographer Jade Dempsey, two Craigslist ride-share buddies and I arrived at Sasquatch! safely with only a minor incident. My little ’94 Protege, which I bought just before the trip, was just fine the whole way until all the idling in line for the campground entrance overwhelmed the radiator and the engine overheated. Poor little guy.

After waiting for the engine to cool and making it into camp, I was struck immediately with the beauty of the surroundings and the positive energy radiating from the immenseÂ  crowd of 20,000 plus concert-goers. The seemingly never-ending field was packed with colourful tents and vehicles, marked with homemade flags to serve as landmarks.

Against Me! played a spectacular set in the late afternoon. The scene looked like it was straight out of a rock music video. The band, dressed in black, had a perfect blue sky as backdrop. The headwind tossed back their hair so elegantly that you almost believed that wind machines were onstage with them. I’ll certainly get beat up for this, but Tom Gabel could have been a younger Bon Jovi. Highly produced, highly aesthetic: pure rock and roll.

The band’s “I Was a Teenage Anarchist” became the theme of the evening. It had the genuine spirit of rebellion, but without all that pesky violence and martyrdom. In the moshpit, blows were exchanges that said at the same time, “I love you man,” “This is the best day of my life,” and “Get out of my fucking way.” Never has a shoulder bash to the stomach been so multi-faceted. 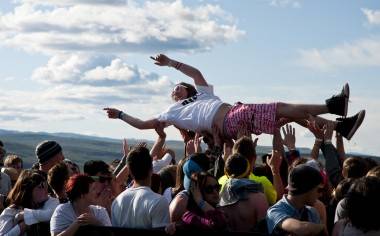 Death From Above 1979 rocked out the main stage in the early evening as part of their reunion tour. I’m a sucker for bands where the lead singer is also the drummer, and Sebastien Grainger rocked it in tight white jeans and t-shirt, sending screeching falsettos out over the crowd.

The Foo Fighters closed out the night. They gave the expected high-energy rock show. I admit I did not stay till the end. I figured that a half hour of the Foo Fighters is probably not much different from two hours of the Foo Fighters, so I set off on a mission to find my tent among thousands, exhausted from a long day and an even longer week. 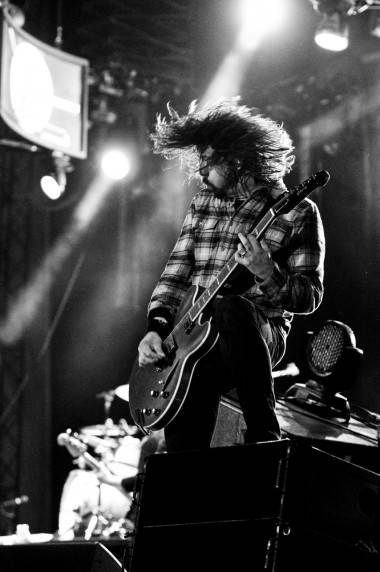 Dave Grohl with the Foo Fighters at Sasquatch, May 27 2011. Jade Dempsey photo

Sasquatch! makes my job really easy. It’s tough to put on a bad show when the sound is so clean, the setting is so breathtaking, and the audience is committed to making each moment more insane than the last. At Sasquatch!, if the crowd doesn’t know your band, they assume you’re cool because you’re there. They have fun because they came with the intention of having fun. It’s a good place to be. 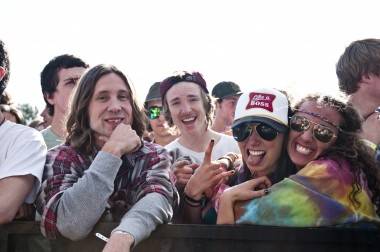