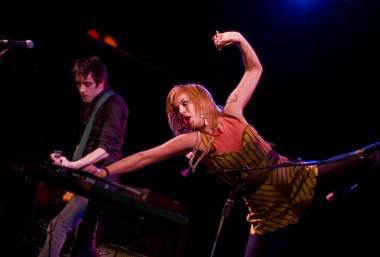 Now that Wolf Parade are on an indefinite hiatus, one of the band’s side projects, Handsome Furs (Dan Boeckner‘s band with his wife Alexei Perry) are busy creating new material. In fact,Â Handsome Furs already have an album ready for release calledÂ Sound Kapital. Sound Kapital is the Canadian band’s third full-length release and isÂ due on June 28 via Sub Pop.

The album was written exclusively on keyboards and the press release suggests this is to “forge life-affirming anthems taut with muscle and blood.”Â Sound Kapital was recorded quickly and polished in the Furs’ derelict Montreal studio, then produced by Howard Bilerman and Arlen Thompson at Hotel2Tango, mixed by Antti Joas and Jonas Verwijnen at Kaiku Studios in Helsinki and Berlin, and mastered by Harris Newman at Grey Market Mastering in Montreal.

You can listen to the single “What About Us” below.Â The sans-guitar aesthetic gives the track an 80’s feel reminiscent ofÂ Dead or Alive‘s “You Spin Me Round (Like a Record).”