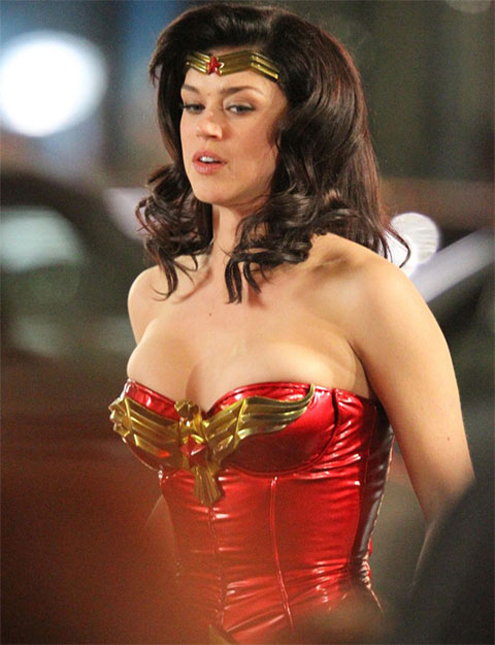 Plus: Batman: Year One and The Avengers

– The maligned David E. Kelly-helmed Wonder Woman pilot headed to NBC has received some rewrites that most agree include less crying and more punching. Kelly, uniquely suited for adapting comic books after creating such hits as Ally McBeal and Boston Legal, has apparently replaced much of the script calling for Princess Diana (Adrianne Palicki) to eat ice cream and be spinster cat lady with assaults on the throats of criminals. All is right in the world.

– Frank Miller’s beloved Batman: Year One series is set to receive the animation treatment by people still unclear on the concept of comics as sequential images and text. Equally disturbing is the trend of Marvel and DC stacking the voice cast with names rather than voice talent. Voice acting is hard, and just throwing A-listers (like Katee Sackhoff and Bryan Cranston in Year One) or D-listers (like Adam Baldwin in Superman: Doomsday) onto the roster gets you little more than headlines. More often than not (and particularly with these comic adaptations) they deliver wooden performances born from a lack of voiceover experience and apparent attitudes of “whatever, it’s just a cartoon”. I allow that this may just be part of my desire for H. Jon Benjamin (Dr. Katz, The Family Guy, Bob’s Burgers, Archer) to voice everyone, ever.

– (minor spoiler warning) Captain America: The First Avenger director Joe Johnston and company were in New York last week filming a scene with Mr. Badass himself, Samuel L. Jackson. SuperHeroHype has photos of the requisite Nick Fury meet that takes place at the end of all these Marvel films leading up to the big team-up in The Avengers…

-… which has started officially filming! Joss Whedon announced on the fan site Whedonesque.com that principal photography on The Avengers has begun as of Monday in Albuquerque, and that he really likes the work of Internet sketch comics BriTaNick. That, and that Marvel lawyers are apparently a tough bunch that like to work directors over when they run their mouths. An ever entertaining statement at Whedonesque. There is also a picture of the chairs they will be sitting in. So that’s something, I guess.

– In what should be eternally known as “Pulling a Chris Evans”, Tom Hardy has posted some glam shots of himself all beefy in advance of playing Bane in Christopher Nolan’s The Dark Knight Rises. Protein shakes for all!