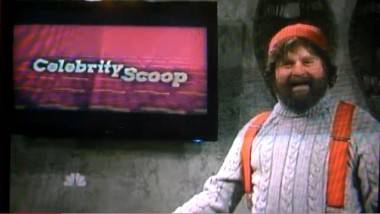 Reaction from actual Winnipegers (Winnipeggers?) has been mostly aghast – but their distress is aimed at the (bad) accents.

Host Zach Galifianakis and cast member Fred Armisen appear in the skit, which purports to be a TV gossip show called “Celebrity Scoop”; right before the skit, a title card flashed a Hollywood-type sign saying “Winnipeg”. The hosts of the “show” speak in bad Fargo-type accents.

@ashkoley: the snl winnipeg skit was silly but the accent is all wrong!

@julia_fearless: loving how SNL made fun of winnipeg. 100% not accurate, but still HILARIOUS… no we dont have accents like those… lmfao.

@ElliottChirps: Apparently Winnipeg is really Fargo? Brutal accents, and not one person said “right on” but worst of all-terrible use of Galifianakis #SNL

@TesslaFillion: Last nights SNL skit on Winnipeg couldn’t have been more opposite of what it’s actually like! hahaha (besides the snow atleast).

@MarkLiebrecht: Found that Celebrity Gossip from Winnipeg sketch on SNL last night amusing, but why did everyone talk like they were from Fargo?

@BillyPollock: OMFG!!! #snl did a skit last night where they used #winnipeg in lieu of the hollywood sign! Awesome!! Exaggerated cdn accents were bad tho

@Jonescam: #snl skit about Canada was soooooooh not funny. PS, Manitoba is a province, and Winnipeg is in that province. / #GeographyFail

Thanks to video poster irobb31

2 responses to “SNL vs Winnipeg”