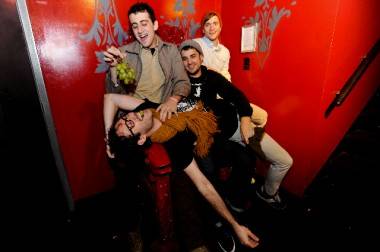 Cymbals Eat Guitars have signed to Barsuk Records and will tour extensively this fall. After self-releasing their critically acclaimed debut Why There Are Mountains and touring for nearly two years, the New York group will be heading into the studio later this month to record with esteemed producer John Agnello (Sonic Youth, Dinosaur Jr., Kurt Vile).

The group has also premiered an amazing cover of Guided by Voices‘ “Gleemer”, which will appear on an upcoming GBV tribute album this year. The song, written by Tobin Sprout, originally appeared on the album Vampire on Titus.