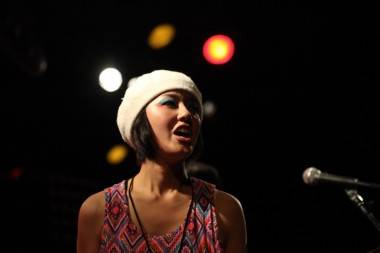 Concert photos – The Suzan at the Commodore Ballroom, Vancouver, Feb 10 2011

The Suzan at the Commodore Ballroom.

The all-female pop rock band from Japan formed in 2004. Members include sisters Rie and Saori and friend Nico.

According to Wikipedia, “Their music is considered multi-genre, with elements of pop, wild dance, punk, and garage rock.” Their song “Come Come” appeared on a Verizon ad for the NFL 2011.

With their album Golden Week For The Poco Poco Beat (at indie label Fool’s Gold Records, 2010), they began a collaboration with Swedish musician and producer BjÃ¶rn Yttling from Peter Bjorn and John.