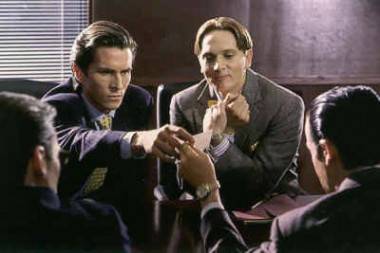 Scene from the 2000 movie American Psycho with Christian Bale.

A look back at Bret Easton Ellis’s novel American Psycho

This year marks the 20th anniversary of Bret Easton Ellis‘s third and most controversial novel. American Psycho, probably better known for the 2000 Mary Harron movie (starring future Batman Christian Bale) it inspired, was refused by one publisher due to its graphic violence. Some reactionary critics found it to be completely without merit. Apparently, it can still only be purchased in Australia in a brown paper bag.

As someone who’d never read it, I was curious. Rather than an in-depth analysis however I am simply jotting down some observations upon completion of the 399-page book, which is told in the first-person by the mad, vicious and designer-clothing-obsessed protagonist, Patrick Bateman.

– It’s kind of oddly prescient. For his serial killer’s profession, Ellis has chosen Wall Street trader (well, it’s not really clear what he does, exactly, but he works on Wall Street). Considering the economic collapse (i.e. metaphorical rape and murder) committed on the financial world by Wall Street, this is quite appropriate. There is also Bateman’s obsession with Donald Trump, years before The Apprentice (and its bastard off-spring Celebrity Apprentice) made the Donald even more of a household pest. Two other things: the obsession with designer labels can be seen to have reached its obvious conclusion with “lifestyle” stores like Anthropologie and Abercrombie and Fitch. And the idea of the serial killer blending into society, and even being a logical response to it, reaches its conclusion in action figures of serial killers, including Patrick Bateman: 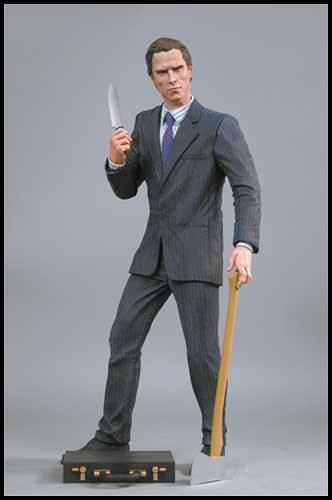 18″ of action-figure serial-killer, for your enjoyment.

– It’s funny. Not in a laugh-out-loud way, but still, there are some brilliant running gags: Bateman’s obsession with Trump, for starters; the way all the characters continuously mistake each other for one another, as though they are all interchangeable; the cocaine paranoia and drive experienced by the needy (throughout, characters snort, look for or complain about coke); Ellis’s send-up of day-time talk TV in the form of The Patty Winters Show, which features increasingly absurd guests (Bigfoot, “a Cheerio”) as Bateman slips further into psychosis. And Bateman is always returning, or worried about returning, videotapes – he takes his rental responsibilities (this takes place in the late ’80s, remember) seriously. (To one date whom he stands up, he explains he was “returning videotapes”.) And one hilarious, tour-de-force chapter is devoted to Bateman and his pals on the phone, trying to decide on a restaurant and make a reservation. Best line: “Confused, I actually cancel a nonexistent table at Zeus Bar.” (In the book, the movie’s famous business-card scene, the one everyone remembers – see video below – takes place in a restaurant, not an office.)

– It’s boring. At every opportunity, Bateman describes everything he and his friends are wearing, down to the designer labels on their suspenders (though, oddly, our status-conscious unreliable narrator almost never mentions colour). He also describes every restaurant meal they eat. These details seem like something Ellis made up as he went along based on combination of words that might sound good together, odd combinations of ingredients and Manhattan restaurant subculture circa 1990. (They’re more like parodies of real meals than actual meals – as in, if you actually put them together the way they are described, they would be inedible. This makes me wonder if this is true for the outfits he describes.) Anyway, these paragraphs are here for a reason, but they are tedious, and I began skimming them early on. 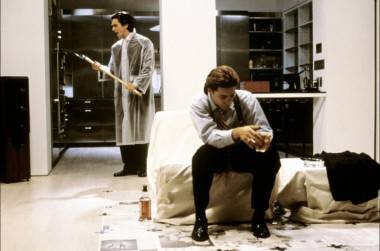 – It’s hard to read. The scenes of violence – the first, by the way, doesn’t occur until a third of the way through the novel – are graphic and horribly disturbing. After the third killing I began skipping over these passages; they are certainly more awful than anything I’ve ever read in a Stephen King novel. Like the rape scene in Gaspar Noe‘s Irreversible, once you’ve seen it/read it, you won’t forget, and it’s arguably better not to have the images in your mind.

– Patrick Bateman has (had) a future in rock journalism. Three of the funnier (in conception if not execution) chapters are just Bateman going into great detail, album-by-album and track-by-track, the careers of Genesis, Whitney Houston and Huey Lewis and the News. The psycho killer is almost convincing; Ellis at least makes a strong case for how someone who is otherwise seemingly intelligent might like these artists. Best line: “What to say to Sports [the title of a Huey Lewis album] dissenters in the long run? Nine million people can’t be wrong.” (But in one jarring note, Bateman later says his favourite band is Talking Heads – Ellis’s nod to that band’s song “Psycho Killer”?)

– Ellis was only 26, the same age as Bateman, when he wrote the novel. It was his third; for a young novelist to tackle such heavy, horrible subject matter is quite astonishing. It’s arguable whether Ellis was completely successful, but American Psycho remains an important, sometimes brilliant satire of societal mores that, scarily enough, we’re still living with. 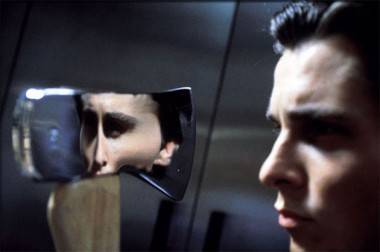 American Psycho is… us!