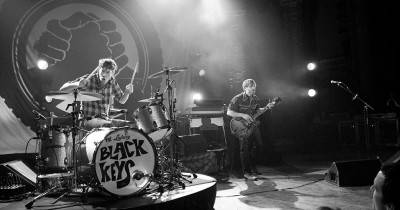 Review and photos–Black Keys Vancouver, at the Orpheum Theatre

Blues-rock lovers of the world should mail a massive “Thank you” card to Akron, Ohio for giving birth to the inimitable musical entity, the Black Keys.Â  Those lucky enough to get their hands on a ticket to their beyond-sold-out show in Vancouver were gleaming as they seated themselves in the jam-packed Orpheum theatre.

Meanwhile, a line-up of twentysomethings waited by the box office praying to all higher powers for a last minute release of seats. From the murmurs in the line, I happened to hear about one desperate fan that paid 400 dollars for a 30-dollar ticket from a merciless scalper. News had spread that this was a show that could not be missed.

The night took off with a heady set from “pop-noir” artist Nicole Atkins. I’ll shamefully admit that I had first heard about Atkins a few years back on PerezHilton.com. A preview of her track “Maybe Tonight” from the LP Neptune City was sandwiched between a blurb on Lindsay Lohan’s latest misdemeanor and probably a gratuitous shot of Jake Gyllenhaal leaving the gym. But as it turned out, the notorious blogger and I shared a common appreciation for the indie singer-songwriter’s evocative compositions and throwback aura.

As her supporting band, The Dead Sea, played the crashing opening measures of “Heavy Boots”, Atkins appeared from the shadows of the stage, immediately cajoling the crowd with her enviable pipes and hip, unruffled stage presence. She earned her place in every audience member’s heart as she professed her penchant for our fresh salmon then crooned her original blues-rock tune “Oh Canada”.

“Cry Cry Cry” and “My Baby Don’t Lie” satisfied listeners with their good ol’ fashioned rock and roll vibe with the swing of 1960s R & B. The slithering melodies of “The Way It Is” and “The Tower” showed the arresting effect of Atkins’ lush and soulful voice. Her set provided us with a copious sampling of the various styles and influences to be expected from her upcoming record Mondo Amore, available in stores in January 2011.

Finger snapping tracks from Smokey Robinson to the Spinners filled in the time before the Black Keys’ highly anticipated arrival. The house lights finally dropped, engulfing the audience in darkness before saturating them in the raw, distorted blues chords of “Thickfreakness”.

The allure of guitarist and singer Dan Auerbach and drummer Patrick Carney was undisputable. Within the first two seconds of their opener, the entire crowd was on their feet and echoes of “Hot damn!” and “Amazing!” were heard throughout the room. The first half of their set indulged long-standing fans with a retrospective of the band’s riff-based classics like “10 AM Automatic” from Rubber Factory and “The Breaks”, a contagious tune off the album The Big Come Up. 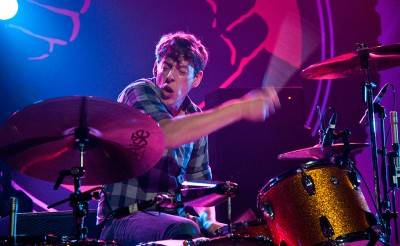 The night moved along with a slower paced cover of the Kinks’ “Act Nice and Gentle”.Â  This by no means diminished the level of energy in the venue. It merely warmed everyone up for the high voltage second half of the evening. Nick Movshon on bass and Leon Michels on drums joined the Black Keys for the remainder of the show, adding those extra necessary layers to the band’s recent compositions.

A revolving disco ball rocketed behind the expanded group, scattering glimmering particles on the walls as they played “Everlasting Light”.Â  Auerbach’s scratchy falsetto voice balanced the song’s bass-heavy progression. At that point, I could not peel my eyes off Carney pounding on his drum kit. With his clenched teeth and hunched shoulders, sweat soaking through his plaid shirt, he evoked pure passion and commitment to his craft.

The Black Keys moved forward with crowd-pleasers from their latest effort, Brothers.Â  The intoxicating groove and swagger of “The Next Girl” and “Howlin’ For You” had fans struggling to find more room to bop around in. The single “Tighten Up” skims the best of delta blues, 70’s rock, and hip hop, delivering another solid hit for the prolific duo. Auerbach finally managed to get a word in, between the screams and whistling from the crowd, thanking Canadians for giving them their first gold record in their nearly 10 year existence. 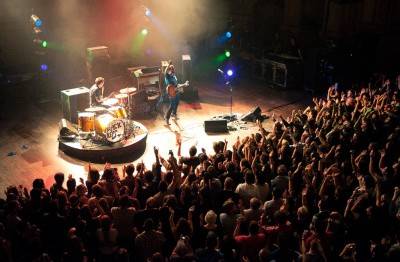 The exhilarating atmosphere remained until the final notes of “Your Touch”, the last song of the encore.Â  The authentic and unparalleled talent of both Nicole Atkins and the Black Keys, matched by the ecstatic crowd, easily placed the show at the top of my list for best concert experience of the year.